Day Two on the Trail to Base Camp

Mayo Clinic's research team is in good shape, making its way toward Base Camp on Everest. Two posts today from physiologist Bryan Taylor and physician Doug Summerfield, plus photos. Physiologist Amine Issa was also pictured in a second Associated Press story from Nepal.

With our bellies full and our faces reddened by the sun, our team sat around the diner table updating blogs, checking various media outlets and contacting friends and loved ones. Tonight’s dinner included yak steak - it tastes nothing like chicken.

Today we trekked from Phadking to Namche Bazaar -- a 6-hour hike with a 3,000 ft elevation gain. Our route took us along the banks of the Dhud Kosi, or "milk river", aptly named given its continual turbulent white colour. As we climbed higher, we crisscrossed the river over a series narrow suspension bridges. 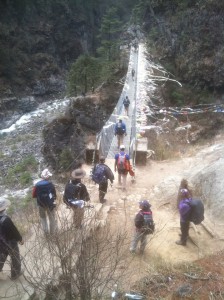 We were so impressed by the incredible snow topped charcoal-colored mountain peaks that were playing a fascinating game of hide and seek with the clouds. These intimidating but spectacular 5,000 to 6,000 meter peaks made the prospect of seeing Everest even more exciting. Another striking aspect of the trek was the contradiction provided within each small village we passed through. The simplistic existence of washing clothes in the street, wild and domestic animals running loose and small children playing hop-scotch on dirt paths was directly contrasted by iPhones, designer clothes and pool bars blaring Dire Straits’ Sultans of Swing (a great song, by the way). I sometimes wonder whether countries like Nepal are better or worse off for having a Western influence.

Another highlight of today was having a prolonged conversation with Derek Campbell and Landon Bassett who are part of the design and marketing team, respectively, at the North Face. I have been asked on several occasions, what can possibly link The North Face, a world leader in outdoor clothing, and Mayo Clinic, a world recognized medical and research facility. For me, and the rest of the Mayo team, the commonality is clear. Let me try to explain. First, a greatly under appreciated facet of TNF is their professional athletes, ranging from mountain climbers and mountain bikers. These are people whose goal is to achieve incredible feats while educating those around them about the beauty of the world. The second less understood part of TNF is its not-for-profit education program aimed to encourage people to "get outdoors" and become active. The third, and perhaps most striking, similarity between TNF and Mayo is the spirit of exploration. While TNF's focus is to explore the "human power" to achieve new limits in our environmental world, our research is inherently exploratory whether it's in our subjects at the clinic or here in the mountains. A high level of curiosity and a desire to learn and evolve our knowledge seems common in each person on our team. Ultimately, if that curiosity can lead to the blending of TNF's studies on equipment design with our more robust scientific methods to create products guided by physiology, then that can only be mutually beneficial. It has been a fun collaboration so far and long may it continue. 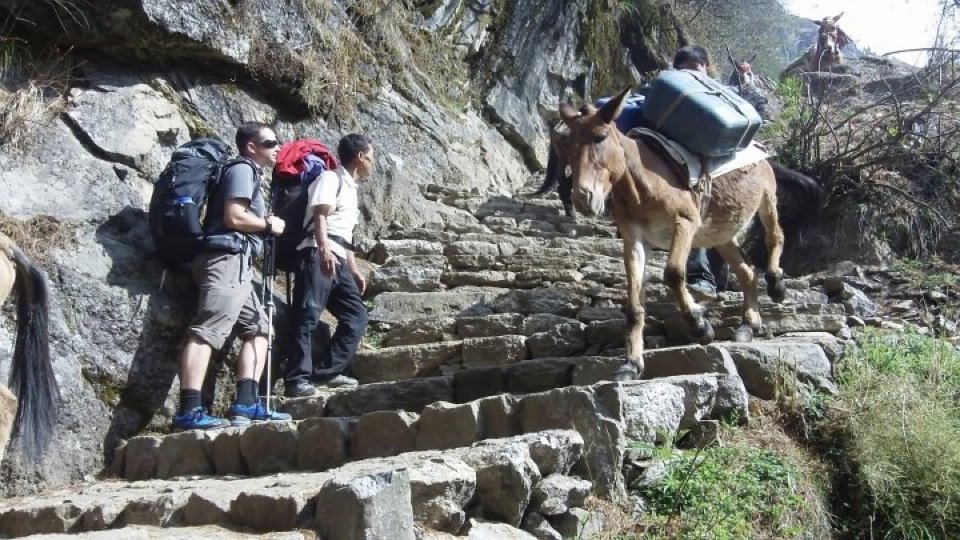 So as an Air Force Flight Surgeon I've had some exciting flights, including one sortie where we almost hit a deer with a Blackhawk helicopter.  Today, however was one flight to talk about for years to come, and a very exciting way to begin our journey.  We boarded the plane in the same airport we landed in on our first day, however instead of the main terminal where international flights boarded, we went to a small terminal off to the side.  Names like "Yeti Airlines" filled the marquees, and we finally settled on one by the name of Tara Air.  As the bus shuttled us out to the tarmac we passed rows of aircraft in various states of repair.  Off to our right there was on old Boeing 727 with its engines removed.  To our left was looked like a DC-3, or some other variant from World War II, which was still flying.   Eventually we came upon the aircraft that would take us to Lukla, otherwise know as Tenzing-Hillary Airport after the first two climbers to successfully summit Mt. Everest.

The plane was a small twin-engine turbo prop, which I believe was a Dornier Do 228.  The main passenger cabin only seated about a dozen people.  Most of our group tried to grab seats on the left side of the aircraft, as these offered the best view of the Himalayas.  My goals in the mad dash for seats were a little different. I sat right behind the pilots - no surprise for those that know me.  I was practically in the cockpit.

The flight was only about 45 minutes long.  As we got closer to destination the tops of the foothills got closer and closer to grazing the bottom of our plane.  Finally there it was, the airport voted as "The History Channel's #1 Most Dangerous Airport in the World" - a fact I tried hard not to share with my fellow passengers until we landed.  I had seen a lot of videos of aircraft landing there on the Internet, but nothing could prepare me for the actual thing.  The only runway sloped upward with its end being higher than the approach.  On the approach side is a cliff face extending down several hundred feet, and on the far side of the runway is a cliff going straight up.  The pilots only get one shot on this approach as you can't perform a "go around".

Luckily, the actual landing was smooth.  The pilots planned for an early flight so there would be minimal turbulence as the air is smooth in the morning.  As soon as we set down, the pilots applied the brakes and before we knew it we had stopped.  Got a great video of the whole thing.