Why Conduct Research at the Top of the World? 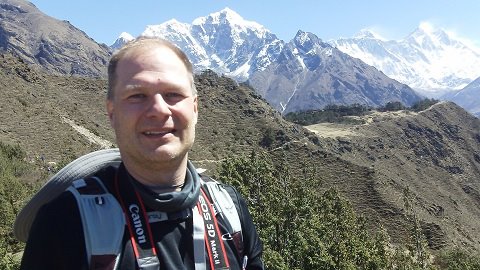 I don’t have M.D. or Ph.D. after my name, and I wouldn’t pretend to be a doctor or a researcher.  The only letters I can use after my name would be B.S., which you can interpret as you want.  The reason I am on this expedition is because of my so-called ability to tell a story using a camera and a pen, or rather, today’s version of the pen, the keyboard.

It’s my understanding that the symptoms that climbers experience as they go higher and higher mimic the symptoms of heart failure patients.  And if we can figure out why climbers are affected, maybe we can figure out how to better help those heart failure patients.  It’s also my understanding that there’s been criticism of this research expedition.  That in today’s technological world you don’t have to take the risk or spend the money to travel to the world’s highest mountain to study these things.  It’s true; we can recreate the effects of extreme altitude in a lab. And it’s possible to study things like sleep, energy expenditure and heart rate variability in a lab.  I know.  I’m a study subject.  I’ve had my breathing and lungs looked at.  I ran till I couldn’t run anymore during a VO2 max test and played the games that check my cognitive function.  What’s hard to imagine is trying to recreate those experiments in any numbers for the length of time needed to get good data.  And for those that balk at the cost of an expedition such as this (and I’m sure it’s far from cheap), I have to imagine it’s more cost effective to use nature’s laboratory than to run a lot of people through artificial altitude tests.  Plus, there's the reality of the environment, feeling the fatigue and having to put one foot in front of the other to get to your next stop that can't be recreated.

And for those that think that this is just some boondoggle or junket, I can only express what I have seen. These are dedicated researchers.  This is physically demanding.  We all have family or friends back home that we won’t see for several weeks.  We’re sleeping in tents or huts with no heat or any of the other comforts of home.  I’ve watched several members of this group suffer (a lot, for some) with nausea, GI problems, fatigue and dizziness or headache.  But we plug on.  You make that decision not because it’s cool to be heading up the world’s tallest mountain, but because you hope that the data you gather could make the difference down the road for patients all over the world.

Why criticize this experiment, the test towards the great human value. Please http://clickerheroes.co/

Thanks for your sharing! The information your share is very useful to me and many people are looking for them just like me! Thank you! I hope you have many useful articles to share with everyone!