The North Face/NatGeo team continues up Everest wearing Mayo's monitors. If you missed it, here is a video (no sound) explaining the multifaceted device they're wearing close to their bodies. It's continually recording a range of metrics. After the climb, Conrad  Anker will personally deliver the monitors to Mayo for download and analysis.

Kudos to Sarah Jane Keller for her story on the Mayo Everest expedition in Wired Science today.

And here is one more science post, by Dr. Amine Issa, on some of the additional health issues that may confront the climbers as they make their ascent:

Other Issues at Altitude

If you thought the only big problems that would come from the changes in altitude would be lung related, think again… As the decline in oxygen saturation starts to impact physiology, basic cognitive function can also be impaired.  Complex tasks may take longer to perform and there is likely an interaction between how the body feels and your ability for mental performance. Poor sleep, a common occurence at high altitude, may also impair cognitive function. Breathing will become irregular, and people will even have episodes of sleep apnea or cluster type breathing where oxygen levels will dip further than during awake periods. Bacteria in the water and food along with dietary changes commonly cause gastrointestinal problems. In fact, altitude alone may cause a lack of appetite with associated nausea.  These issues may also lead to diarrhea and/or vomiting  which can accentuate dehydration, a problem that can heighten the severity of acute mountain sickness.

Additionally, vision often becomes compromised at high altitude and in some cases even retinal hemorrhage can occur. In fact climbers who have had their eyes altered through Lasik or other types of eye surgery may be more vulnerable. 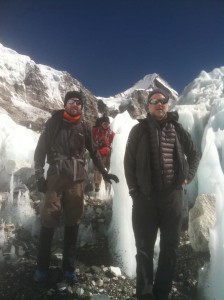 Being several miles closer to the sun intensifies radiation exposure and with snow everywhere to reflect the light snow blindness can be a serious issue. Proper precaution includes wearing glacier glasses . Everyone also tries to keep their skin covered at all times and apply generous amounts of sunscreen.