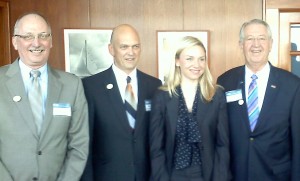 CHICAGO --- Collaboration has no borders. That was clearly evident last evening when nearly 200 people -- an international cross section of economic developers, researchers and government officials -- crowded a networking reception hosted by the state of Minnesota. Many of us from Mayo Clinic are here at BIO 2013, the global biotech conference, which migrates from city to city each year. We haven't heard the first estimates of attendance yet, but the norm is around 18,000 registrants. They come to share ideas, attend workshops and presentations, and find ways to work together, as client and vendor, but just as often as partners (either large or small P) in some kind of venture. The cost of technology development and the demand for new innovations mean no one can go it alone any more. Many of the people here from Minnesota represent small  biotech startups seeking larger markets. And many are here to attract business investment or research involvement in their home state or country. Last night Minnesota's commissioner of Employment and Economic Development spoke, along with the mayor of Rochester, Minnesota and the chancellor of the University of Minnesota Rochester. But the talks were brief and people focused on networking for over two hours, including government representatives from Germany and Japan. I spoke with people from Ireland, Sweden and Canada. Researchers may have little funding for travel these days, so they make the most of this one week when what seems like the entire world is present under one roof. It happens in networking events like last night's and in one-on-one "speed dating" sessions facilitated by the conference organizers. The next few days may mean the beginning of profitable relationships or a connection that leads to a new discovery or company. To not be present and participating means you are opting out of the biotechnology world.