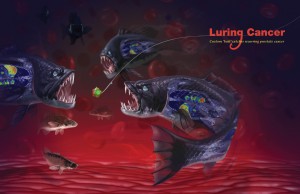 Many prostate cancer survivors live in fear of being told that their cancer has returned. It’s even scarier to be told that the doctor knows the cancer is there because of rising PSA levels, but that he can’t find it. Doctors and patients alike know that early detection of the recurrent cancer is critical to the patient’s chance of beating it a second time.

The problem, however, is locating it.

A Mayo Clinic research team has developed a new imaging technique that can often find the recurrent disease months, if not years, earlier than other imaging techniques. Prostate cancer uses choline, a B-complex vitamin, as a building block. So when a minute amount of radioactively-labeled choline (choline C-11) is injected into a patient, it is quickly taken up by the cancer — like a fish rising to the bait.

The prostate cancer then emits radiation, allowing doctors to pinpoint its location. A positron emission tomography (PET) scanner is “able to tell where in the body this radiation is being emitted,” explains Mayo Clinic radiologist Val Lowe, M.D.. 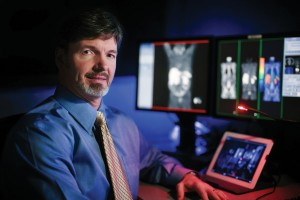 Choline C-11 isn’t toxic, and the radioactive element is so minimal, it’s really not much of a pharmacologic safety issue, explains Dr. Lowe. “If you take a grain of sugar and divide it into 100 pieces, one of those pieces is enough to do a PET scan.”

As well as being safe, the PET scan takes little time. Once the radioactive element is added to the choline C-11, it has a very short shelf-life. The half-life of choline C-11 is only 20 minutes, meaning it loses half of its radioactivity every 20 minutes. Because the radioactivity is the imaging agent that allows the PET scanner to see the cancer, the agent must be used shortly after it’s made. It cannot be stored and shipped. It essentially must be manufactured on-site.

All told, it takes about 45 minutes to make choline C-11, and the scan itself takes only about 20 minutes. The results are analyzed and a report is typically ready half an hour after the scan is completed.

“For the first time ever, we will have a clear blueprint of where the patient stands, at a far earlier course in treatment failure,” says Eugene Kwon, M.D., a Mayo Clinic urologist. “It has basically ripped the curtain off the Wizard of Oz.”

At this time, Mayo Clinic is the only health care provider in the country authorized to do this test. But when filing with the FDA, Mayo Clinic waived all exclusivity. It wanted other sites in the country to be able to manufacture and use the drug to better serve their own patients.