A Mayo Clinic researcher, along with collaborators from Harvard Medical School, developed a method to first identify a breast-cancer-promoting gene and then specifically target this gene with a nanoparticle-based, injectable therapy that reverses breast cancer in mice.  The results, published this week in Science Translational Medicine, may provide a first step in developing a new non-surgical treatment option for patients diagnosed with early-stage breast cancer.

“Precancerous cells are at a tipping point, in which they could become full-blown cancer or not,"  says Mayo Clinic pharmacologist Hu Li, Ph.D., a co-first author on the study. "Our results show that, if we know the right target genes, it is possible to tip the balance in favor of a more normal cell state, preventing cancer progression, and improving survival outcomes.”

In order to identify the most-significant genes that were turning normal breast cells into tumor cells, the researchers developed a computational approach to identify cancer-related changes in regulatory genes which, in turn, control many other genes.  In theory, targeting such regulatory genes could have a dramatic effect, based on all of the downstream genes which would also be affected. The team zeroed in on a specific regulatory gene, HoxA1, as a driver of breast cancer in mice with a high rate of hereditary breast tumors.

To see if HoxA1 could be targeted to prevent further tumor development in these mice, the team decided to down-regulate HoxA1 within the breast tissue, specifically in the cells where the tumor develops. 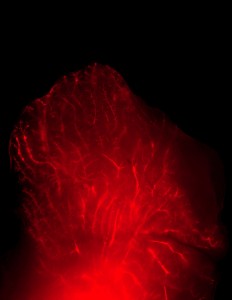 To accomplish this, they used tiny, fat-based nanoparticles, which were coupled to molecules designed to specifically down-regulate HoxA1, and may be injected into the body.  Hoping to reduce toxicity, they decided to inject these nanoparticles directly into the breast ducts, specifically where the tumors form, rather than systemically, as others have tried in the past.

The result:  The researchers discovered that mice developed dramatically fewer tumors when treated with this novel therapy.  They also found that targeted depletion of HoxA1 appeared to reverse tumor characteristics, effectively tipping the cellular balance back to a normal cell state.

In the same way that HoxA1 was identified, the researchers say it may be possible to advance the technology to the point where doctors are able to identify the best therapeutic gene targets specific to an individual patient’s tumor, allowing for the design of tumor-specific and patient-specific therapeutic strategies.

The research was supported by the Department of Defense, SysCODE (Systems-based Consortium for Organ Design & Engineering), the National Institutes of Health, Susan G. Komen Foundation, the Wyss Institute at Harvad, and Mayo Clinic.