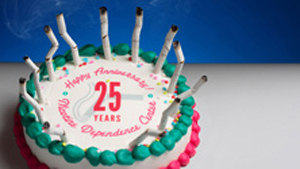 From modest beginnings and a single research project, the Nicotine Dependence Center at Mayo Clinic celebrates its 25th anniversary of helping patients overcome their addiction to tobacco. That success has been driven, in large part, by a dedicated and innovative research program.

In 1988, when counselors greeted the first patient at Mayo Clinic’s new Nicotine Dependence Center, attitudes toward smoking were much different. More than 28 percent of all Americans smoked a pack of cigarettes a day, and the Surgeon General had yet to declare nicotine addictive.

Still, when the Nicotine Dependence Center staff members go to work every day, they are keenly aware of a disturbing fact that is as true today as it was in 1988.

“Tobacco use is still the single most preventable cause of premature death in the world,” says Richard D. Hurt, M.D., founding director of the Nicotine Dependence Center.

According to the National Cancer Institute, an estimated 443,000 people in the United States will die in a given year because of tobacco-caused illnesses. Complications from tobacco use account for 1 in 5 deaths in the U.S. annually.

The research program at the Nicotine Dependence Center has been on the cutting edge of discovery since shortly after opening its doors. By September 1988, Dr. Hurt had his first grant to study the effectiveness of the nicotine patch.

Ivana T. Croghan, Ph.D., an experimental pathologist and epidemiologist at Mayo Clinic in Rochester, Minn., joined the staff of the Nicotine Dependence Center in 1991 and is now its research program coordinator. Through the years, the research team has studied every form of nicotine replacement therapy available. “We have conducted studies on the patch, gum, inhalers, lozenges and nasal spray,” Dr. Croghan says.

Researchers have also studied medications to treat tobacco addiction. Two drugs, bupropion (Zyban) and varenicline (Chantix), have become staples in treating tobacco dependence. The research team then expanded its previous work to study combination therapy, in which nicotine replacement therapy is combined with medication; this, too, is now a treatment standard.

“Much of the fundamental work in nicotine research has been done here at Mayo,” says Jon O. Ebbert, M.D., an internist at Mayo Clinic in Rochester and associate director for research in the center.

In all, the Nicotine Dependence Center’s research team has conducted 110 randomized clinical trials involving more than 25,000 research participants in the last quarter century. Research at the center now includes behavioral interventions for tobacco users, population studies, studies on the cost-effectiveness of various interventions and outcomes research.

How tobacco dependence is treated tomorrow will most likely be influenced by the work being done today by the Nicotine Dependence Center's research program. In the meantime, physicians and counselors in the center will continue to see patients, offering the best treatment options for the most preventable cause of premature death in the world.

The articles are wonderful in this publication. Would it be possible to be able to email the link to the article.

Congratulations to the team. I am proud to know and work with them.

The articles are wonderful in this publication. Would it be possible to be able to email the link to the article.

Congratulations to the team. I am proud to know and work with them.