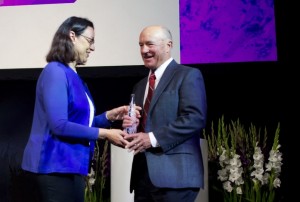 Presenting some new Alzheimer's discoveries wasn't the only high point for Mayo Clinic researchers in Copenhagen recently at the Alzheimer's Association International Conference. On July 14, Steven Younkin, M.D., Ph.D., was awarded the Khalid Iqbal Lifetime Achievement Award for his years of research on the disease.

Dr. Younkin is Professor of Neuroscience at Mayo Clinic’s campus in Jacksonville, Florida. Before being recruited to Mayo in 1995, he was professor of Pharmacology and Pathology at Case Western Reserve University. Then he began research focused on the role of the amyloid beta protein in Alzheimer’s disease. Dr. Younkin’s current research focuses on the complex genetics of Alzheimer’s, seeking to identify effective, disease-modifying therapeutic approaches.

Khalid Iqbal, Ph.D. cofounded the international Alzheimer’s research conference in 1988 with Bengt Winblad, M.D., Ph.D., and Henry Wisniewski, M.D., Ph.D. This lifetime achievement award is named in Dr. Iqbal’s honor and presented by the Alzheimer’s Association to an outstanding scientist who has dedicated his or her career to helping millions of people around the world through their research.