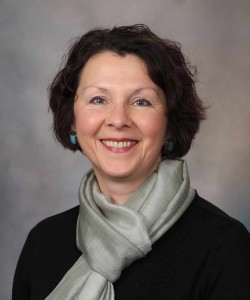 A research group led by Mayo Clinic neuroscientist Eugenia Trushina, Ph.D, has investigated whether treatment with a small molecule CP2 can prevent the debilitating effects of Alzheimer’s disease  in three animal models of familial Alzheimer's, an inherited neurodegenerative disorder with symptoms of progressive cognitive decline in aging populations.

There is no cure for Alzheimer's in humans, and with no treatment aimed to prevent or stem the disease, it is estimated that 100 million people might suffer from Alzheimer's by 2050.

Dr. Trushina and her colleagues have shown that, by mildly inhibiting mitochondrial complex I with CP2, they reduce the levels of the biomarkers amyloid beta and phospho-Tau, long associated with the disease, averting cognitive decline in all three mice models. The mild inhibition of complex I augments mitochondria resistance to stress and the overall function of mitochondria in the cell. The inhibition did not cause any oxidative damage or inflammation. Another benefit of treatment involved restoration of axonal trafficking, which is inhibited very early in neurons from FAD animals. Fidelity of axonal trafficking is essential for proper supply of neurons with neruotrophic factors and delivery of mitochondria to distal sites of axons, which is essential for synaptic transmission, and ultimately, for maintaining memory. Observations of modulated mitochondria complex I across species even hint at the possibility of promoting longevity in model organisms and humans.

“I think that we’ve basically discovered a new molecule and a new mechanism that can induce a positive metabolic adaptation to offset the development of Alzheimer's,” Dr. Trushina says. “We don’t understand all of the details of the molecular mechanism, but it’s interesting that it works in vivo, and I think that’s the most important thing for future study.”

Dr. Trushina says that her group has a well-defined target for CP2, a site at the very entrance of electrons into mitochondrial complex I, called the flavin mononucleotide binding domain (FMN).

The study is a pre-clinical validation of CP2 in animal models, a proof of its success and safety and potential to be next considered for clinical trials in humans.

The results appear in a paper published in the journal EBiomedicine, March 16, 2015.

CP2 was synthesized in 2004 by medicinal chemist Duy H. Hua, a co-author of the paper and a faculty member of Kansas State University. Drs. Trushina and Hua first collaborated on a 2009 study where they demonstrated that CP2 protects neurons expressing mutant huntingtin protein associated with neurodegeneration in Huntington’s disease.

A valuable bonus CP2 provides as a drug is its rare ability to penetrate the blood brain barrier, a moat-like liquid structure that protects the brain and spinal cord from being compromised. Most drugs that are developed can’t do this on their own, which complicates drug delivery as well as drug design.

In the recent study, researchers used different transgenic animal models and applied a battery of cognitive and behavior techniques to see how long they could delay – even prevent – the onset of Alzheimer's in the animals, genetic “sure-bets” to develop the disease.

The strength of the study is that the animal models tested in two regimens, as many prior Alzheimer's drug studies only tested one animal model, a limitation that could miss the detection of significant Alzheimer's details. In the first regimen, researchers put breeding animals on the drug and tested their progeny who remained on CP2 through 14 months. The populations represented different familial mutations. One model, for instance, had the mutation for the amyloid precursor protein, and was called APP; another had the mutation for presenilin 1 and was called PS-1, the third was a hybrid of APP and PS-1 one, called APP/PS-1, a double mutant expected to exhibit Alzheimer's symptoms much sooner than the other two groups. These were tested with non-transgenic controls (NTG), which were of the same genetic stock but without mutations.

“Frankly, we saw nothing resembling Alzheimer's deterioration in any of the groups up to 14 months,” Dr. Trushina says. “There were no signs of histopathology – no tumors or other morphologies.”

In the second regimen, researchers asked the question: If we give the drug in presymptomatic stage, what will happen? So, they took animals from the double mutant population and gave a selected number the CP2 drug at 2.5 months of age and compared them with untreated mice. The treated animals didn’t develop any of the cognitive and behavioral problems that their untreated counterparts did. They were evaluated by a battery of techniques that included novel object recognition, maze and cage activities and hanging bar and rotarod activities.

If the drug someday will work in humans, it’s possible that it could be taken once a person hits an arbitrary age, say 50. “It would be like taking vitamins,” Dr. Trushina says. She says preliminary, unpublished data strongly suggest that a CP2 regimen will work at symptomatic stages – that is, when the disease has begun in an individual – and administering of CP2 slows Alzheimer's progression down.

Dr. Trushina is most taken by the counterintuitive nature of her results. “The irony is that, by inhibiting something like mitochondrial complex 1 – taking some of its function away – you end up inducing positive metabolic function,’ she says. “We’re the first group to stumble over that controversy.”

“We didn’t do everything in my lab,” she says. “We sent tissue to two different collaborators to measure gene expression profiles and outsourced tissue for histopathology reports, for instance. And the results were replicated. It took a village, but I’m very confident in the results.”