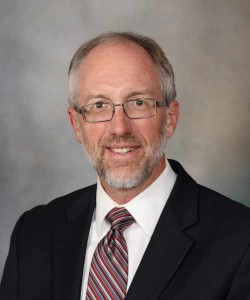 The American Association of Physicists in Medicine (AAPM) has announced the election of Mayo Clinic’s Stephen Riederer, Ph.D., as a Fellow of the association. The category of Fellow honors members who have distinguished themselves by their contributions in research, education or leadership in the medical physics community. The award was presented at the annual meeting of the AAPM in July.

Dr. Riederer has been the Director of the MR Laboratory and a member of the Physics Division of the Department of Radiology of Mayo Clinic in Rochester since 1988. His research interests are in the technical development of magnetic resonance imaging (MRI). This includes use of the underlying MRI physics, development of new imaging techniques and implementation that addresses clinically important problems. He is also a member of the Mayo Clinic Research Committee, charged with providing oversight and management of research throughout the enterprise, and chair of the Research Finance Subcommittee.

He received the S.M. degree in Nuclear Engineering from MIT in 1975 and the Ph.D. from the Medical Physics Program of the University of Wisconsin – Madison in 1979. He worked from 1980 to 1983 for GE Medical Systems and from 1983 to 1988 at Duke University (Radiology).

AAPM activities include the Editorial Board of Medical Physics (1986-1992) and Chair of the Physics Program of RSNA/AAPM (1996-1998). Dr. Riederer served as President of ISMRM (1994). He was a member of the NIH Diagnostic Radiology Study Section (1989-1993) and of the Scientific Advisory Committee of The Whitaker Foundation (1997-2003) which provided research funding to many young biomedical engineers.

Dr. Riederer has been PI of NIH R01 grants continuously since 1984. He has been principal advisor to over two dozen students earning Ph.D. degrees, many of whom have gone on to careers in medical physics and biomedical engineering. His research areas of interest have been in the imaging physics of x-ray computed tomography, digital subtraction angiography, and magnetic resonance imaging.