A collaboration of 32 researchers in seven countries, led by scientists at Mayo Clinic’s campus in Florida, found that a mutation in only one allele of a Parkinson’s gene, known as PINK1, increases the risk of early-onset disease. The finding, published recently in the journal Brain, addresses a longstanding debate about whether individuals need to inherit two copies of the mutation for an early form of the disease to occur. 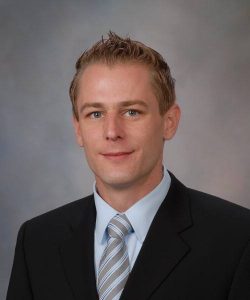 The familial form of early-onset Parkinson’s, affecting patients as soon as age 45, is known to occur in individuals with mutations in both inherited alleles of the PINK1 (PTEN-induced putative kinase 1) gene. “This study showed that if a person inherits a specific mutation in just one PINK1 allele, the disease could develop at about age 55 or so. By contrast, the most common, nonfamilial forms of Parkinson’s develop at about age 65,” says the study’s senior investigator, Wolfdieter Springer, Ph.D., a neuroscientist at Mayo Clinic’s Florida campus.

Moreover, the study went on to explain how a single mutation in the PINK1 gene affects cells. PINK1 works with another gene, PARKIN, to clean up damaged mitochondria in the body’s cells. A specific mutation (p.G411S) in one allele of PINK1 substantially impairs this “quality control” pathway by causing a structural change in the enzyme that, in turn, inhibits those produced from other healthy PINK1 allele. “This rare mutation has an outsized effect, and the remaining levels of functional PINK1 protein are not enough to cope with damaged mitochondria,” Dr. Springer says. Without a clean-up mechanism, damaged mitochondria accumulate and become toxic, especially within neurons.

The study started with genetic findings when one of the lead authors, Andreas Puschmann, M.D., Ph.D., of the Department of Neurology, Skåne University Hospital, Sweden, was a visiting scientist at Mayo Clinic. Subsequent steps involved a “very effective synergetic” effort of clinical, structural and cell biologists, along with geneticists and data from thousands of affected patients “It took a real international collaboration to solve this puzzle,” he says.

The findings will not only be helpful to patients who want to understand their risk of disease, but also in the potential development of treatment. Dr. Springer’s team is moving ahead to explore how to preserve the enzymes of the PINK1/PARKIN pathway despite the presence of a mutation. “What we’ve learned about the structure-function changes of the enzyme is now helping us pursue drug design that addresses details of the protein on an atomic level,” he says.

This article originally appeared on the Mayo Clinic News Network.