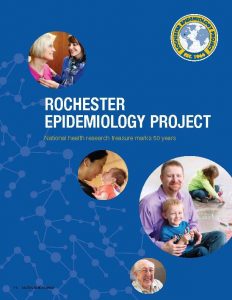 In 2002, Giancarlo Logroscino, M.D., Ph.D., then a research scientist at the Sergievsky Center at Columbia University in New York City, published the only paper on the long-term prognosis of status epilepticus (SE) along with research collaborators from Columbia and Mayo Clinic. They established for the first time,  in a rigorous investigation of SE in a population- based setting, the framework for data on frequency, classification and prognosis of the condition. SE is defined as continuous seizure of 30 minutes or more, or two or more seizures without full recovery of consciousness between them. Their work is published in journals including Neurology, European Journal of Neurology, Annals of Neurology and Archives of Neurology.

The Rochester Epidemiology Project (REP), which marked its 50th anniversary in 2016, was the basis for this research.

Understanding an infrequent neurologic condition Dr. Logroscino spent three months at Mayo Clinic in 1996 mining the REP for population-based data on SE, which was considered an infrequently occurring condition 20 years ago.

“I was getting my Ph.D. in epidemiology from Columbia and needed data from the REP for my thesis,” says Dr. Logroscino, professor of neurology, Neurodegenerative Diseases Unit, Department of Basic Medicine Neuroscience and Sense Organs, Department of Clinical Research in Neurology at the University of Bari in Puglia, Italy. “My mentor at Columbia, Dr. W. Allen Hauser (EPID ’69), had used the REP for years for epilepsy research.

“At Mayo, I enjoyed the support of many people, especially the REP staff, who had an exceptional sense of organization. Without their help, I could not have collected the data in such a short time. I also enjoyed advice from many outstanding scientists at the REP and in the Department of Neurology at Mayo Clinic.” 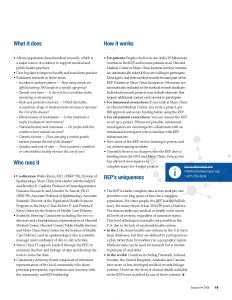 Answering questions about the REP

Dr. Logroscino received his Ph.D. with distinction as a result of his thesis work and since then has used the data he collected as the basis for other research  papers.

“Being able to go to the complete patient files is terribly important,” he says. “The REP is an incredible data source that was conceived many years before the majority of investigators recognized the importance of the population-based setting as different from the clinical-based setting. The REP has added a huge amount of information in chronic diseases and, particularly, neurologic diseases such as epilepsy.”

Shedding light on drug prescribing patterns Wenjun Zhong, Ph.D. (HSR ’13), used the REP in 2012 when she was a postdoctoral research fellow in the Division of Epidemiology at Mayo Clinic. She conducted a study aimed at health care utilization and prescribing patterns in the Olmsted County population. She found that the most prescribed medications were antibiotics, antidepressants and opioids. A subsequent study of prescribing trends for antidepressants over seven years indicated an increase in prescriptions during that period — mostly to women age 50 to 64 and older than 65

“Most U.S. studies on prescription drugs included only the Medicare-eligible elderly population or individuals with particular health insurance coverage due to the lack of a national health system,”  says Dr. Zhong, a biostatistician at the Center for Health Incentives and Behavioral Economics at the University of Pennsylvania in Philadelphia. “Although  it’s recognized that the overall use of antidepressants has generally increased over time, there is little published literature on recent trends in antidepressant prescriptions in a geographic region. I wouldn’t have been able to conduct this research without the REP — a great resource for population-based studies.”

Changing knowledge about health and health care Since the REP was officially established in 1966, hundreds of researchers from around the world have used this unique national research resource and the one-of-a-kind data it includes to find the root causes

of disease, identify health trends and determine best practices. Research from the REP has supported more than 2,600 publications in every field of medicine and has contributed to key findings in health and health  care delivery including dementia, epilepsy, heart failure, multiple myeloma, osteoporosis, Parkinson’s disease, rheumatoid arthritis and stroke. 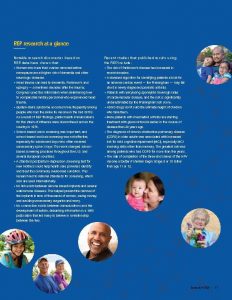 REP research at a glance

“The Rochester Epidemiology Project is an integral part of Mayo Clinic’s medical research history,” says Walter Rocca, M.D. (MSEP ’93), co-director of the REP, Division of Epidemiology, and the Ralph S. and Beverley Caulkins Professor of Neurodegenerative Diseases Research. “Most everyone who trained at Mayo Clinic is familiar with the half-century of data from 95 percent of Olmsted County residents. But they may not know about the important enhancements we’ve made in the last decade.

Dr. Rocca says that at any given time, about 300 projects are underway using the REP — 15 to 20 of which are major federally funded grants. Current studies involve 21 states and the District of Columbia and 10 other countries — Canada, the Czech Republic, Ethiopia, France, Ireland, Israel, Japan, Norway, Peru and Scotland.

Goals for the next half-century include increasing the coverage and timeframes of people living in the 27 counties, improving the infrastructure to make studies easier, and developing an open data-sharing portal so that medical researchers, public health agencies and even laypeople from anywhere in the world can explore REP databases to answer medical questions.

This article and related content were first published in Mayo Clinic Alumni Magazine, Issue 4, 2016. For more news and information about and for alumni of Mayo Clinic, visit the Alumni Association website.