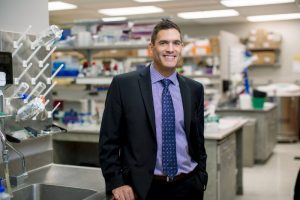 The Mayo Clinic Robert and Arlene Kogod Center on Aging is pleased to announce that Nathan LeBrasseur, Ph.D., has received the 2016 Director’s Award for his work as a researcher and program director of the Healthy Aging and Independent Living (HAIL) program.

The Director’s Award is presented to investigators who show achievement in the following areas:

Dr. LeBrasseur oversees multidisciplinary efforts to extend health span and promote autonomy in older adults. The HAIL program is designed to translate discoveries in the biology of aging from the laboratory bench to the clinical bedside. Ongoing work includes blood- and performance-based measures of health and function, pharmacological interventions targeting mechanisms of aging, and rapidly scaled and implemented means to promote autonomy and well being in older adults.

“Dr. LeBrasseur brings a unique and valuable perspective to the Center,” says James Kirkland, M.D., Ph.D., Director of the Center on Aging. “As the director of the Healthy Aging and Independent Living program, he has done an excellent job of bringing researchers together and setting up collaborations. He has published a number of important studies including breakthrough findings recently published in Nature Communications.”

In this study, Dr. LeBrasseur and others demonstrate a link between the biology of aging and idiopathic pulmonary fibrosis. Idiopathic pulmonary fibrosis occurs when lung tissue becomes damaged and scarred. The thickened, stiff tissue makes it difficult for the lungs to work properly, causing shortness of breath, fatigue, declining quality of life, and, ultimately, death. Life expectancy after diagnosis is between three to five years and there are currently no effective treatment options.

Dr. LeBrasseur and his team, which included experts across specialties at Mayo Clinic, as well as Newcastle University Institute for Ageing and The Scripps Research Institute, studied the lung tissue (made available by the National Institutes of Health) of healthy individuals and of persons with mild, moderate and severe idiopathic pulmonary fibrosis.

Researchers found that the markers of cellular senescence, a process triggered by damage to cells and linked to aging, were higher in individuals with idiopathic pulmonary fibrosis and further increased with disease severity. Then, they demonstrated that factors secreted by senescent cells could drive inflammation, abnormal tissue remodeling, and fibrosis, which are hallmarks of the disease. In a mouse model of the human disease, Dr. LeBrasseur’s team showed that both suicide gene- and drug-mediated removal of the senescent cells from unhealthy mice improved clinically relevant measures of lung function and physical health, such as exercise capacity on a treadmill.

While further studies are needed, researchers hope that targeting senescent cells could be a viable treatment option for individuals who suffer from idiopathic pulmonary fibrosis.

Dr. LeBrasseur was also senior author on a study showing that poor diet and lack of exercise accelerate the accumulation of harmful senescent cells and the onset of age-related conditions in mice, published in Diabetes, as well as a study where his team developed a way to accurately measure a circulating factor, called GDF11, to better understand its potential impact on the aging process, published in Cell Metabolism. The latter study represents an effort to identify “frail” patients at risk for adverse health outcomes following medical procedures, such as surgery or chemotherapy. Dr. LeBrasseur and his team believe that their work can help clinicians leverage: the right treatment for the right patient at the right time; prehabilitation strategies to optimize presurgical resilience; or more robust transitional care plans for vulnerable older adults.

I was diagnosed with polymyositis in 2002 and idiopathic pulmonary fibrosis (IPF) by a lung biopsy in 2007. I have been on prednisone at various dosages from the beginning along with various immune suppressant medications. I began taking tacrolimus in 2008 and have held off any progression of more scarring. I had shortness of breath and coughing. I was relatively active but I learned to pace myself. I have the best medical team that all work together.. As the disease progressed all medication stopped working, i was introduced to Health herbal clinic in South Africa who have successful herbal treatment to Pulmonary fibrosis and other lungs diseases. I spoke to few people who used the treatment here in USA and they all gave a positive response, so i immediately purchased the Pulmonary fibrosis herbal remedy and commenced usage, i used the herbal supplement for only 9 weeks, all symptoms gradually faded away, herbs are truly gift from God. contact this herbal clinic via their email healthherbalclinic @ gmail. com or visit www. healthherbalclinic. weebly. com

Thanks for this great post I really liked it a lot. <a href=”https://musicallylogin.org”>Musically Login</a>

Im Simone Bever i was diagnosed of Pulmonary Fibrosis for 4 years, i have tried several doctors with different types of medications with no help, i was browsing the net and i came across Standard Herbs Home i decided to give a try and i purchased their herbal remedy and i used it for 3 weeks and i am totally cure of Pulmonary fibrosis. Thanks to you Standard Herbs Home. Will advice you to have a contact with them if you have any similar problem or any type of disease through website: www . standardherbshome . com

After my 3rd pulmonary embolism in 2003, I was diagnosed with pulmonary fibrosis and I read that people usually die within 5 years. My specialist has me on blood thinners, prednisone and other steroids that I inhale daily. October 2006 I decided to go with natural treatment and was introduced to Mbeki Herbal Clinic natural organic COPD Herbal formula, i had a total decline of symptoms with this COPD Herbal formula treatment. The infections, shortness of breath, fatigue, dry cough and other symptoms has subsided. Somehow, the herbs managed to keep me alive for 13 years.Visit Mbeki Herbal Clinic official website ww w. mbekiherbalclinic. com or email herbs@ mbekiherbalclinic. com.
I have had great improvement with my over all respiration with this product and i breath very much easier, i can never be thankful enough to nature

After my 3rd pulmonary embolism in 2003, I was diagnosed with pulmonary fibrosis and I read that people usually die within 5 years. My specialist has me on blood thinners, prednisone and other steroids that I inhale daily. October 2006 I decided to go with natural treatment and was introduced to Green House Herbal Clinic natural organic idiopathic pulmonary fibrosis Herbal formula, i had a total decline of symptoms with this pulmonary fibrosis Herbal formula treatment. The infections, shortness of breath, fatigue, dry cough and other symptoms has subsided. Somehow, the herbs managed to keep me alive for 13 years.Visit Green House Herbal Clinic official website w ww.greenhouseherbalclinic .com or email herbs@ greenhouseherbalclinic. com. I have had great improvement with my over all respiration with this product and i breath very much easier, i can never be thankful enough to nature

He contributed a lot to the research, deserved it and much, congratulations. Peter Trader Aqui