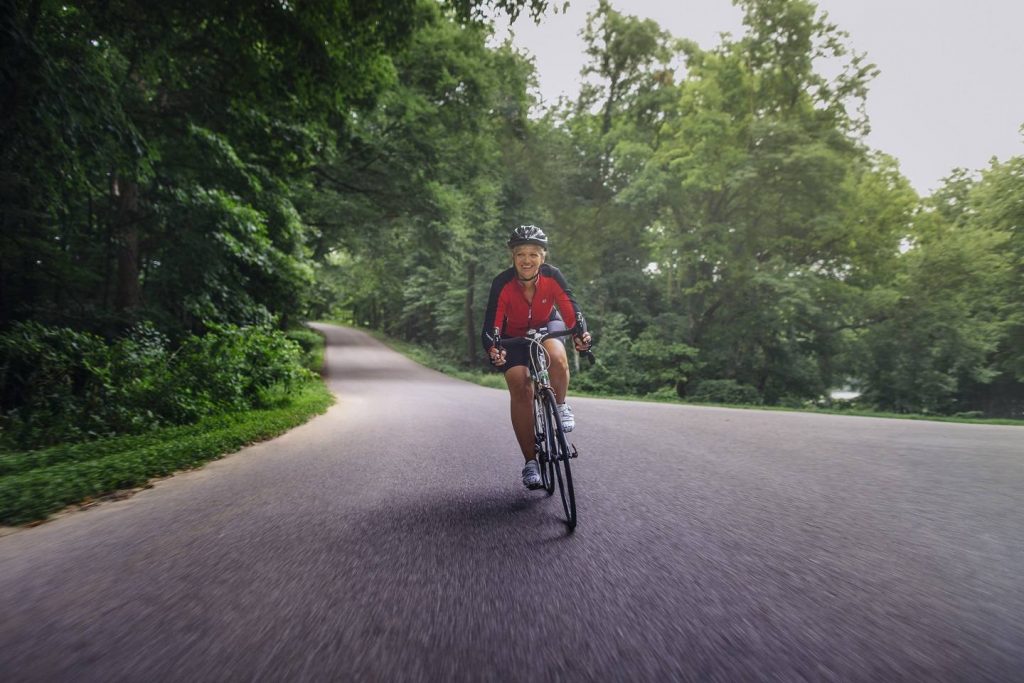 It was only when Kathi Schroeder took to the bone-chilling streets of Cedar Rapids, Iowa, on her bike last January that she noticed something was not right.

“I was having trouble breathing; just taking a deep breath was difficult,” she remembers.

Kathi went to her local doctor’s office and was prescribed a round of antibiotics and steroids to address what the doctor considered a respiratory issue.

“I felt better for a little while — but then by March, I just bloated up and was having increasing difficulty breathing,” she says. “It was terrible. I just thought, something is horribly wrong.”

As the symptoms progressed, Kathi’s concern grew, and on March 18, 2015, she went in for a chest X-ray. Her doctor took one look at the X-ray and sent her directly to the emergency room for a CT scan and additional X-rays.

The news was not what she was expecting. “Right there in the emergency room, they told me, ‘We think you might have ovarian cancer.’ “

A week later Kathi arrived at Mayo Clinic in Rochester, Minnesota, in search of answers. A series of biopsies on the fluid around her lungs confirmed her worst fears. “To be hit at that point with ‘You have stage IV cancer,’ you have to stop and say, ‘Where do I go from here?’“

Kathi had a general idea of the statistics. Even if she beat the cancer in the first round, upward of 80 percent of women with her diagnosis will have a recurrence of, and ultimately die of, the cancer. A main reason why is because, most of the time, ovarian cancer only presents after it has spread within the abdominal cavity. And since it is constantly bathed in abdominal fluid, the cancer tends to break off and spread before the tumor grows in size.

Unfortunately, the only approved treatments are surgery and chemotherapy. 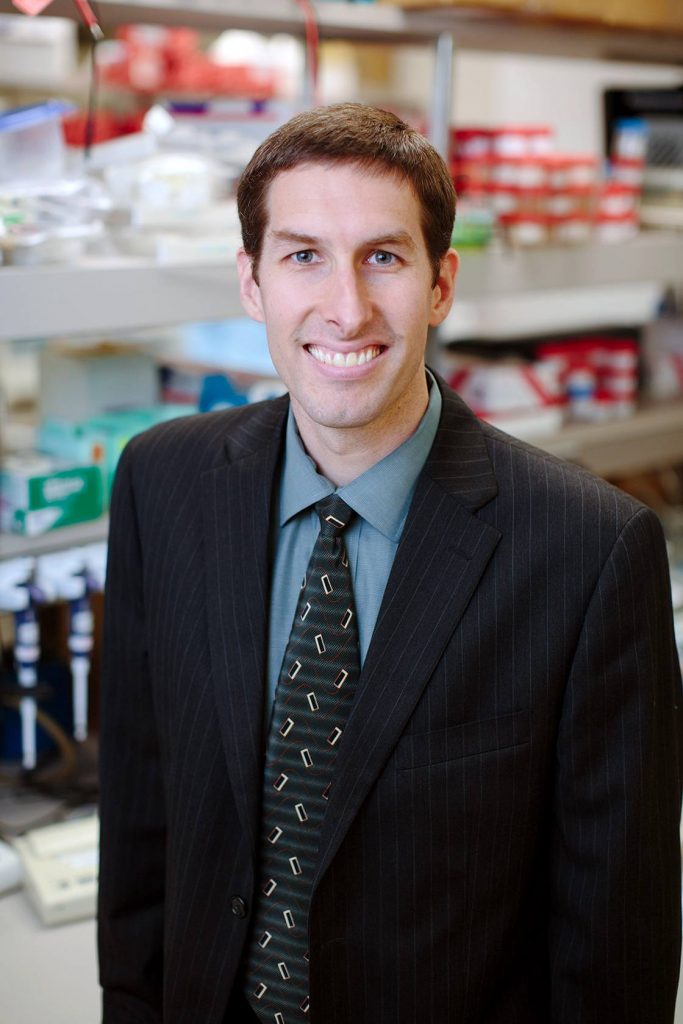 “The standard options against ovarian cancer are maxed out,” explains Mayo Clinic oncologist Matthew S. Block, M.D., Ph.D. “We have drugs that work and surgery works, but they don’t work perfectly. They are reasonably effective when there’s a known tumor, but they’re not effective to continue throughout the remission. Unfortunately, the majority of my ovarian cancer patients still die of their cancer.”

First of Its Kind

One of the trickiest aspects of cancer is its ability to outwit the body’s immune system. For instance, T cells are on the forefront of the immune system. It’s their job to recognize invasive cells and kill them. They do this by detecting proteins — cells with familiar proteins are left alone; cells with foreign proteins are destroyed. But as cancer cells grow, they devise ways to kill the T cells or trick them into leaving the cancer cells alone.

To help patients harness the power of their immune systems, Dr. Block and colleagues launched a clinical trial. The phase I trial targets a specific protein, folate receptor alpha, in the cancer cells. It also uses a specific type of T cell, Th17, to trigger an immune response. These T cells not only attack the tumor cells but regulate other T cells that suppress the immune system’s response.

The trial is the first of its kind. “There are plenty of other ovarian cancer vaccines, but to my knowledge, this is the first time something has that goal of attacking T-reg cells via Th17 cells,” Dr. Block says.

When Kathi heard about the study, she knew she wanted to participate. Fortunately, she met the criteria — have stage III or IV cancer, be in remission, and have completed both surgery and chemotherapy.

“I’m always like, This is the next step, this is the next step,” she says. “That’s just my nature. This study has helped a lot because it feels like I’m doing something. It just makes you feel very powerful. I want it to work not only for me but also for other women that are out there in this situation.”

Back on the Bike 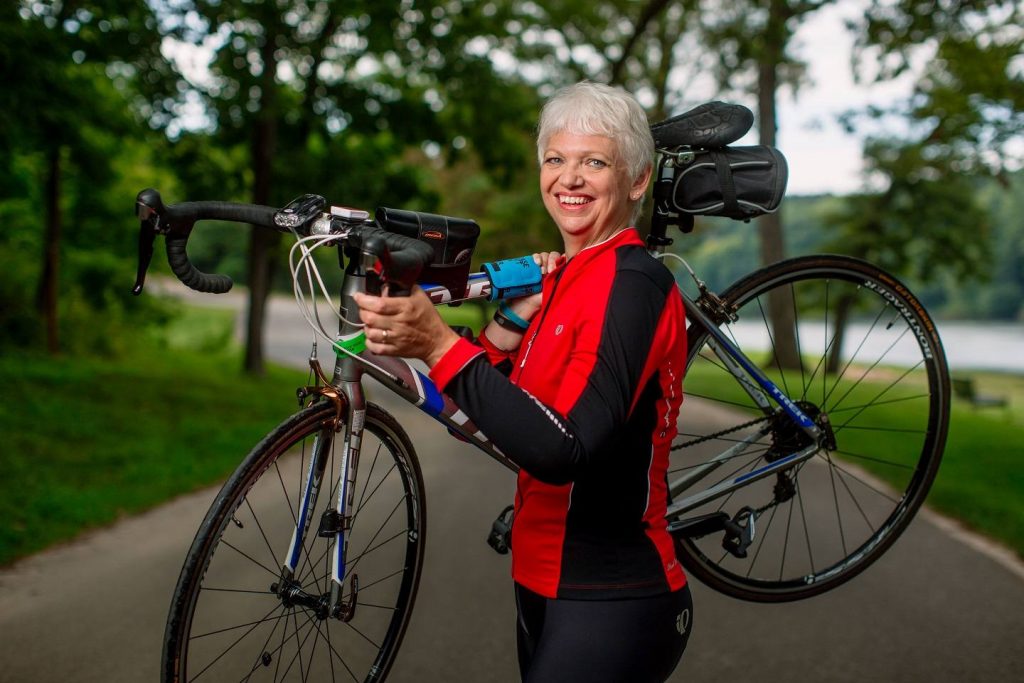 Kathi arrives at Mayo Clinic every three weeks for a series of shots and to be tested for recurrence. After the first three months, she will reach the maintenance phase — only coming in every three months for two years. “This is so easy. You get a few little shots, and you’re free to go. It’s just a wonderful study.”

And so far so good.

Kathi is back to riding her bike and is training for RAGBRAI — a nearly 500-mile, seven-day bike ride across Iowa.

“You wonder, how much of my life can I cram into the next year, two years,” she says. “The people that live past five years are what, maybe 20 percent? Where do you go with that when you have a family? You look to your bucket list and say, ‘Let’s just plan it and do it.’

“There’s not a day that goes by that I don’t think about it. I try to keep a positive attitude. I mean, in this case, it feels like I’m doing something — but you still have to live day to day. You can’t just stop living. This study is helping me with that.”