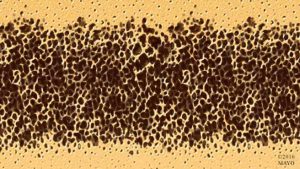 Low bone mass and osteoporosis are estimated to be a major public health threat for almost 44 million U.S. women and men 50 and older, according to the National Osteoporosis Foundation. Bone is a living tissue that is constantly being broken down and replaced. Osteoporosis occurs when the creation of new bone doesn’t keep up with the removal of old bone.

“While we know from previous work that the accumulation of senescent cells causes tissue dysfunction, the role of cell senescence in osteoporosis up to this point has been unclear,” says Sundeep Khosla, M.D., director of the Aging Bone and Muscle program at Mayo Clinic’s Robert and Arlene Kogod Center on Aging. “The novelty of this work for the bone field lies in the fact that, rather than targeting a bone-specific pathway, as is the case for all current treatments for osteoporosis, we targeted a fundamental aging process that has the potential to improve not only bone mass, but also alleviate other age-related conditions as a group.”

In the study, researchers used multiple approaches to target senescent cells in mice with established bone loss between 20 and 22 months of age. That’s the equivalent of over age 70 in humans. Approaches included using:

“The effects of all three approaches on aging bone were strikingly similar,” says Dr. Khosla. “They all enhanced bone mass and strength by reducing bone resorption but maintaining or increasing bone formation, which is fundamentally different from all current osteoporosis drugs.”

The benefits on bone found in elderly mice were not evident in younger mice. That, coupled with the finding that the senolytic drugs were effective when given only intermittently, supports the link between senescent cells and age-related bone loss. Researchers administered a senolytic drug combination (dasatinib and quercetin) once per month to eliminate senescent cells.

“Even though this senolytic drug combination was only present in the mice for a couple of hours, it eliminated senescent cells and had a long-lasting effect,” says James Kirkland, M.D., Ph.D., director of the Kogod Center on Aging and co-corresponding author of the study. “This is another piece of the mounting evidence that senolytic drugs are targeting basic aging processes and could have widespread application in treating multiple chronic diseases.”

Drs. Kirkland and Khosla say that being able to administer the drugs intermittently poses less risk for side effects than with drugs that must be taken daily. Also, current therapeutics in the bone field that treat bone loss “work against themselves,” meaning that, if they decrease resorption, they also decrease formation. In this study, the senolytic drugs decreased bone resorption, while maintaining or increasing bone formation.

“With the aging of the population in the U.S. and around the world, age-related bone loss is going to continue to be an enormous public health problem, and patients with osteoporosis have a higher risk for other age-related comorbidities,” says Dr. Khosla. “By combining the knowledge of three separate labs and enlisting the expertise of several others in a true team science approach, we were able to collaborate and make these findings possible. We need to continue to pursue these potential interventions that target fundamental aging mechanisms as, hopefully, an eventual way to reduce the burden of fractures and other conditions, such as cardiovascular dysfunction, diabetes and frailty.”

The research was supported by the National Institute on Aging, The Connor Group, the Noaber Foundation, the Ted Nash Long Life Foundation, the Glenn Foundation, Robert and Arlene Kogod Center on Aging, Mayo Clinic, and the American Federation for Aging Research.

Others on the research team from Mayo Clinic are:

Mayo Clinic and Drs. Kirkland, Pirtskhalava and Tchkonia have a financial interest related to this research.