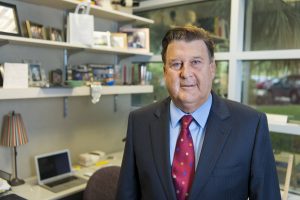 Neurologist Thomas Brott, M.D., vividly remembers when he first saw his research making a difference for patients. It was 1987, and for years, he’d been devastated to see patients suffering the immediate effects of a stroke: facial drooping, loss of language, and paralysis. A physician at the University of Cincinnati, he’d learned of a new clot-dissolving drug—tissue plasminogen activator, or t-PA—that seemed capable of restoring blood flow in a blocked carotid artery. When the National Institutes of Health requested research proposals, he organized investigators at several medical centers to test t-PA in patients with acute strokes.

He was on call at a participating hospital in Cincinnati when a patient suffering stroke paralysis received t-PA. The patient slowly regained motion as the drug took effect. “It was breathtaking,” he recalls.

Dr. Brott, who came to Mayo Clinic’s Jacksonville, Florida, campus as a clinician-researcher in 1998, has devoted his career to studying numerous methods of treating and preventing dangerous clots and brain bleeds. He’s led complex, multi-institutional clinical studies involving thousands of patients and has helped define some of the best treatment options for patients.

This year, Dr. Brott, the Eugene and Marcia Applebaum Professor of Neurosciences, was selected as the recipient of the 2017 Research Achievement Award from the American Heart Association. He received the honor during the AHA Scientific Sessions in Anaheim, California, “for his pivotal role in the development of life-saving interventions that have revolutionized treatment of acute ischemic stroke, with enormous consequent benefits dramatically reducing stroke death and disability in the world’s population,” the AHA reports. He’s the fifth Mayo Clinic researcher to receive the honor since its inception in 1953.

But research hasn’t always been a smooth ride, he acknowledges, and succeeding has involved perseverance and luck. In the early 1980s he became interested in complication rates of carotid endarterectomy, a surgical method of preventing stroke by removing plaque from a carotid artery. With no funding, he examined more than 500 patient charts at 12 area hospitals and found complications of the procedure alarmingly high.

Though he would eventually serve for eight years as the Director of Research on Mayo’s campus in Florida, at the time, he could not get his first paper published. He finagled an invitation to present his study at a meeting of the American Academy of Neurology. In a twist of fate, a producer from ABC News attending the meeting became interested in his findings and developed a feature on 20/20 and Nightline. Suddenly endarterectomy was in the news. Surgeons—including pre-eminent neurosurgeon Thoralf Sundt, M.D., at Mayo Clinic’s campus in Rochester—were interested in discussing the study with Dr. Brott. Ultimately, the study helped lead to randomized clinical trials defining the risks and benefits of carotid surgery.

Dr. Brott forged ahead, researching intracerebral hemorrhage and defining the dynamic changes in some patients’ brains immediately after a hemorrhagic stroke. Collaborating with other researchers, he investigated a drug for stroke. “It didn’t work, but I learned all the ins and outs of conducting a clinical trial,” he says. When the NIH requested a method to measure the severity of a patient’s stroke disability, Dr. Brott worked with a team to develop the National Institute of Health Stroke Scale (NIHSS), which became the standard examination scale for stroke patients worldwide.

Around the same time, he noticed a Science paper describing the use of t-PA to unblock coronary arteries and prevent heart attacks.  He and others at an NIH meeting suggested a study using the drug to dissolve blood clots in arteries in the brain. NIH funded the study, and Dr. Brott’s team in Cincinnati enrolled most of the study’s patients. The introduction of the drug, now part of the standard of care for patients with small clots, was a key moment, says AHA President John Warner, M.D., “This triggered a major reorganization of stroke care delivery systems and the development of new tools to more reliably recognize its severity.”

During the last two decades at Mayo Clinic, Dr. Brott has focused on stroke prevention. He compared stenting—the insertion of wire mesh to widen a narrowed carotid artery—with endarterectomy in a randomized clinical trial involving more than 100 medical centers. Known as the Carotid Revascularization Endarterectomy vs. Stenting Trial, or CREST, the study he led evaluated more than 2,500 patients for ten years and found the two procedures to be equally safe and effective.

Dr. Brott is now the principal investigator for CREST II, for which he and neurologist James Meschia, M.D., received a National Institute of Neurological Disorders and Stroke grant of $39 million, one of the largest grants at Mayo Clinic. CREST II, a seven-year trial, is evaluating whether treatment with medicine (such as blood pressure drugs and statins) is as safe and effective as surgery or stenting in preventing a stroke. “Clinical research depends on good ideas, and I’ve learned it requires you to persevere, to be a bulldog. But you can’t do it without having great collaborators,” he says. “You have to be a bulldog who works with bulldogs.”

How can we prevent the blocking of the carotid artery and the plague forming in the same?