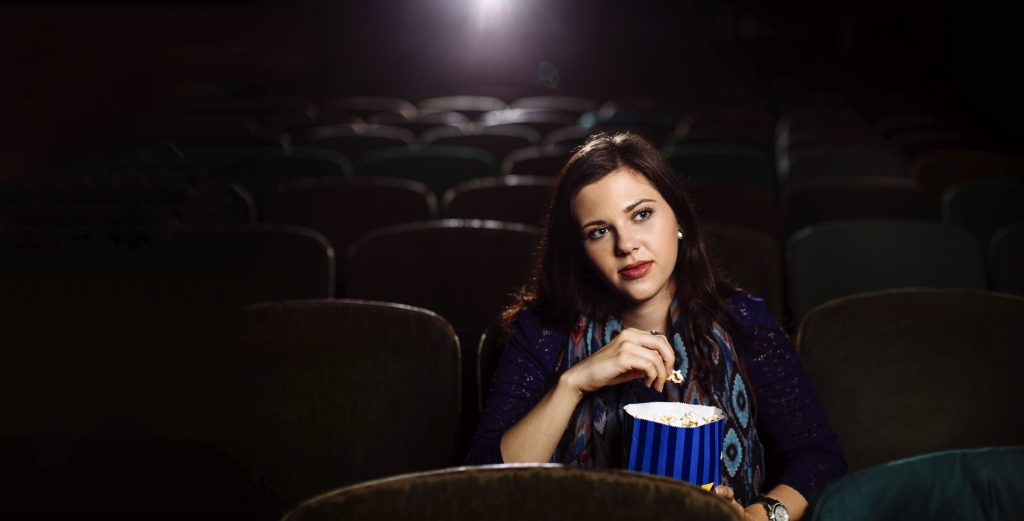 Given a Diagnosis That May Result in Blindness, a Film School Graduate Seeks a Second Opinion at Mayo Clinic

As a young girl growing up in Buffalo, New York, Devan Brady’s bedtime story selection was more a survey of American literature than preschool perennials. She remembers her father reading Moby- Dick to her when she was just 3 years old.

“My dad went for the big guns,” Devan says. “The bigger the book, the better.”

These adventures unleashed Devan’s imagination. As she grew older, she saw some of her favorite books, such as the Harry Potter series, leap from the page to the big screen. Devan knew there was only one path forward for her: creating magical worlds for kids who love to escape through books and film, just like she did.

But after graduating from college in 2016 with a degree in media production, a medical scare threatened to steal this dream from Devan.

An avid traveler, Devan was on a flight to Japan in January when her legs kept falling asleep, which she knew was common, but the frequency and severity were still puzzling. Several months later in August, Devan was working three part-time jobs: production assistant on a local film crew, wedding photographer and restaurant server. While on her feet for a restaurant shift, Devan felt her legs go numb again. She didn’t regain full sensation for several hours.

Worried, Devan called her local primary care provider, who ran some blood and imaging tests. The results were normal, but her doctor referred Devan to a neurologist for further evaluation.

In the weeks between appointments, Devan didn’t experience any additional episodes and started thinking she was in the clear. After completing a more rigorous set of tests with the neurologist, Devan expected to hear that she had something relatively simple like a pinched nerve.

She didn’t expect to leave his office with a diagnosis of the autoimmune disease neuromyelitis optica, more commonly known as NMO.

NMO occurs when the body’s immune system produces a molecule called an antibody that mistakenly targets healthy tissue. Antibodies normally attack targets such as cancer or infection so that the immune system can clear those damaged cells out of the body. But with NMO, these antibodies attach to healthy tissue in the central nervous system, mainly in the optic nerves and spinal cord, but sometimes in the brain, too. As a result, people can experience blindness, weakness or paralysis in the legs or arms, and painful spasms.

“For the whole month of October, I was on edge, nervous,” says Devan. “NMO is a serious disease, and to tell a 22-year-old girl that you could lose your eyesight or use of your legs, that’s scary. What is my life going to be like? I’m going to live in constant fear of losing the ability to do what I love.”

While the neurologist couldn’t confirm the diagnosis through an MRI, Devan tested positive for the NMO antibody in two blood tests, so he prescribed an immune system-suppressing drug to inactivate the circulating antibodies and stop their production, which in turn could prevent further attacks.

A lifetime of taking powerful drugs was just as startling to Devan as the diagnosis. Because her local neurologist had only seen a handful of patients with NMO in the last decade, Devan and her father, a nurse with the Veterans Health Administration, began researching options for a second opinion.

Through friends and her father’s colleagues, Devan learned about Mayo Clinic’s Department of Neurology and its expertise in NMO.

For at least the last 75 years, what is now known as a spectrum of NMO disorders — sometimes called Devic’s disease — was commonly misdiagnosed as multiple sclerosis (MS). Because MS is treated with medication that boosts immune system action, these therapies could be ineffective and even harmful in the case of NMO. In 2005, physician-scientists and basic researchers at Mayo
Clinic discovered a unique antibody specific to NMO. This breakthrough allowed for the development of a diagnostic test, ensuring that NMO patients get the right treatment right away.

“Especially since the test for NMO was created at Mayo Clinic, we thought if anyone would know about this, they would,” Devan says.

The Value of a Second Opinion

As a major referral center, Mayo Clinic sees many patients such as Devan who seek a second opinion — and for good reason. In a recent study, Mayo researchers found that as many as 66 percent of these patients have their original diagnosis refined and in 21 percent of cases, changed.

Receiving care for the wrong diagnosis can send patients down a medical rabbit hole involving costly, ineffective treatments, recurring symptoms and a nagging feeling that something just isn’t right. In the worst cases, diagnostic error can even be deadly.

That’s where Mayo Clinic’s expertise can be a true lifesaver, says internist Jon O. Ebbert, M.D. He serves as associate medical director for the Mayo Clinic Robert D. and Patricia E. Kern Center for the Science of Health Care Delivery, which led the second opinion study. The center investigates the “how” of effective, efficient care, with the ultimate goal of establishing evidence-based best practices that can be shared broadly within and beyond Mayo Clinic to improve health care for all.

According to Dr. Ebbert, there are pressing reasons for proving the value Mayo Clinic brings to patients with uncertain diagnoses.

Devan’s second opinion benefited from several factors: a high-volume multiple sclerosis and NMO practice that sees thousands of patients a year, a team of experts who consult with each other, and the close integration of research into patient care that results in the most advanced diagnostic techniques.

The difference did not escape Devan.

“Mayo Clinic is just in a completely different wheelhouse — it’s how health care should be.”

Devan and her father made the trip to Rochester, Minnesota, in November and met with neurologists B. Mark Keegan, M.D., and Natalie Parks, M.D., a former Mayo Clinic fellow now at Dalhousie University in Canada. As a provider in Mayo’s Division of Multiple Sclerosis and Autoimmune Neurology, Dr. Keegan regularly sees patients seeking second opinions for diagnoses ranging from multiple sclerosis to NMO and a variety of rare inflammatory diseases affecting the central nervous system.

The team explained that Dr. Parks would do an in-depth examination with Devan and discuss the results with Dr. Keegan. Then, Dr. Keegan would do a second examination.

“He said, ‘If you would have come here after that first day that you had issues and told me your symptoms, I never would have even thought to test for NMO. But because your doctor did, and the result was positive, now we have to deal with it,’” Devan recalls.

The first step was to repeat Devan’s bloodwork, but this time using a much more sophisticated version of the NMO test, which Mayo Clinic has continuously refined over the past decade. If the test came back positive, Dr. Keegan would perform an MRI to look for lesions on her spine. If it came back negative, he would be reasonably confident that Devan did not have NMO. Because getting the blood test results would take a few days, Devan and her father returned to Buffalo to await the news.

A week later, Devan was back at work on a film set when she got a call from Mayo Clinic. It was Dr. Parks with her test results: Devan did not have NMO.

Listening to Dr. Parks explain that the local test results were false positives, Devan started crying tears of relief. She immediately called her father, who interpreted the emotion in Devan’s voice as a bad sign.

Dr. Keegan called a few days later to reassure Devan of the results. In his opinion, Devan’s local neurologist likely relied too heavily on the less sophisticated blood test to make a diagnosis and didn’t factor in the complete picture — Devan’s normal medical history, evaluations and MRI test, plus the fact that Devan’s symptoms were nonspecific to NMO.

Devan has been in good health since her visit to Mayo Clinic, which she credits to staying active and sticking to her workout routine. She now says her only fear for the future is the same as any postcollege graduate’s: finding a job.

But armed with the same boundless imagination that fueled her childhood dreams, she knows the possibilities are limitless.

This article was originally published in Mayo Clinic Magazine, Volume 2, 2017.

Tags: About, B. Mark Keegan, Center for the Science of Health Care Delivery, People, republished

Very good article! Keep up the great writing. Thanks for sharing