Schematic of the extracorporeal circuit of the Spheroid Reservoir Bioartificial Liver

Mayo Clinic researchers are planning clinical trials of a bioartificial  liver that might eventually provide an alternative to transplantation for patients with liver failure. Known as the Mayo Spheroid Reservoir Bioartificial Liver (SRBAL), the novel device has been shown to reduce the severity of liver disease and improve survival in laboratory testing on pigs. (Bioartificial organs are comprised of both living tissue and synthetic materials).

"SRBAL has demonstrated ammonia clearance at vastly higher levels than the reports from earlier generations of bioartificial livers," says Scott Nyberg, M.D., Ph.D., a liver transplant surgeon and biomedical engineer at Mayo Clinic in Rochester, Minnesota. "I foresee a day when we can use these devices as a bridge therapy to transplantation or even to support patients long term and avoid liver transplantation."

SRBAL would be most appropriate for patients who:

Patients who use SRBAL as a bridge to transplant might utilize the device for an average of one to five days, up to a maximum of two weeks.

Similar to hemodialysis in the treatment of kidney failure, Mayo Clinic's bioartificial liver functions outside of the patient's body. However, SRBAL is a "hybrid" extracorporeal device in that it contains hepatocytes of porcine or human origin as a biological source of liver function. The device can maintain functionality of primary hepatoctyes in the range of normal liver physiology — even at the high cell density required for human therapy.

"Our ability to successfully perform liver transplant surgery has led to our biggest problem in this field: the shortage of donor organs," Dr. Nyberg says. "If we can devise new technologies to avoid liver transplant, we've achieved a major accomplishment."

A quarter century of research 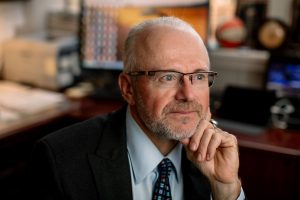 Scott Nyberg, M.D., Ph.D., uniquely trained as both a liver transplant surgeon and biomedical engineer, leads efforts to develop cell-based therapies for the treatment of patients with liver failure and metabolic liver disease.

Dr. Nyberg, who leads Mayo Clinic's Artificial Liver and Liver Transplantation Laboratory, has devoted more than 25 years to developing the bioartificial liver. The idea came from a mentor during his medical training, who suggested that Dr. Nyberg combine his medical and engineering expertise. His recent research has received funding from the Regenerative Medicine Minnesota initiative.

"As a liver transplant surgeon, I see how serious liver failure is for patients of all ages," he says. "Liver disease is a world problem. At Mayo Clinic, we're leading the way internationally with the liver-support device. It's quite an exciting time."

The artificial liver and liver transplantation lab has extensive experience in isolating and cultivating primary hepatocytes for use in cellular therapies. The lab uses genetically engineered pigs with a homozygote deficiency in fumarylacetoacetate hydrolase (FAH) — the first large animal models of hereditary tyrosinemia type 1 (HT1) in hereditary metabolic liver disease. The phenotype of FAH-deficient also includes spontaneous cirrhosis, portal hypertension and possibly hepatocellular carcinoma. The porcine model could potentially allow for the large-scale production of high-quality human hepatocytes needed in order for bioartificial livers to be incorporated into clinical use.

About 38,000 people in the United States die each year from liver disease, according to the Centers for Disease Control and Prevention. "Acute liver failure claims the lives of over 30 percent of people who are diagnosed with it. Liver transplantation has been the go-to option for treatment, but it comes with many risks and isn't always an option, due to compatibility and availability of donor livers," Dr. Nyberg says. "A bioartificial liver device could allow physicians to treat and extend the lives of more patients, safely and cost-effectively, with fewer risks.

This article was originally published in Cancer Physician Update, a quarterly publication for physicians that discusses trends and advances in hematology and oncology at Mayo Clinic.