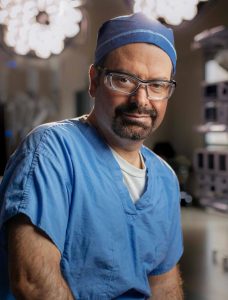 Before Rodrigo Ruano, M.D., Ph.D., could practice medicine in Minnesota, a new law had to be created.

Imagine being deemed so critical to a health care organization that the state legislature acts immediately to allow you to practice there. That’s how Rodrigo Ruano, M.D., Ph.D., chair of the Division of Maternal Fetal Medicine in the Department of Obstetrics & Gynecology, came to Mayo Clinic in Rochester. Calling him an eminent physician — an internationally trained physician with extraordinary ability — Mayo Clinic urgently appealed to the Minnesota legislature in May 2016, 10 days before the end of the legislative session.

To practice in the U.S., foreign-trained physicians must pass the U.S. Medical Licensing Exam, which typically requires at least a year of study. Previously Dr. Ruano practiced at Texas Children’s Fetal Center at Texas Children’s Hospital. Texas and a handful of other states have adopted legal provisions that allow extraordinarily skilled foreign-trained physicians to practice at academic medical centers.

As a result of Mayo’s appeal, Minnesota passed a similar law, allowing eminent foreign-trained physicians to practice in the state if they are deemed to be a person with “extraordinary ability in the  field of science or as an outstanding professor or researcher” as defined under federal regulations. The physicians also must be a faculty member at one of the state’s two academic medical centers — Mayo Clinic or the University of Minnesota — to be eligible for licensure.

Dr. Ruano was recruited to Mayo Clinic to establish a center of excellence for fetal surgery in the Upper Midwest — one of only about eight such centers in the U.S. The move by the legislature was prudent. In Dr. Ruano’s first year at Mayo Clinic, he performed 20 fetal surgeries. These procedures, which typically are performed between 16 and 32 weeks of gestation, include: 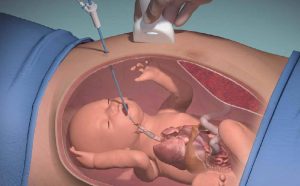 Fetal endoscopic tracheal occlusion (FETO) involves inserting a scope into the fetus’s mouth via the mother’s uterus. Then, a balloon is inflated to block the fetus’s airway to allow the lungs to develop.

Dr. Ruano is considered an international expert in specialized FETO procedures for severe congenital diaphragmatic hernia and fetal cystoscopy for severe lower urinary tract obstruction syndrome. FETO procedures involve inserting a tiny scope into the mother’s uterus, advancing it into the fetus’s mouth  to the trachea, and deploying and inflating a latex balloon to block the airway for a few weeks to allow the lungs to increase in size. The mother must remain near Mayo Clinic after balloon placement until the fetal endotracheal balloon can be safely removed several weeks later. After the baby is born, the hole in the diaphragm is repaired by pediatric surgeons.

Without this procedure to develop seriously underdeveloped lungs, many of these babies don’t survive the first hours after birth, according to Randall Flick, M.D., director of Mayo Clinic Children’s Center. “With FETO, many of  them do very well and have lower requirements for intensive care and ECMO (extracorporeal membrane oxygenation). Dr. Ruano has brought a wealth of experience to Mayo Clinic, allowing us to build on what we already offered and provide new services.

“Families are very sophisticated in looking for this type of specialty care and will travel across the country for it. Offering FETO and other fetal interventions gives the Mayo Clinic Children’s Center national visibility. Our group is the first in the Upper Midwest to provide this specialized procedure.”

Dr. Ruano received a 2017 Regenerative Medicine Minnesota Research Award to help him establish a fetoscopic regenerative program.  The  award also will allow him to evaluate the feasibility and safety of prenatal tracheal occlusion to regenerate fetal lung growth. He will participate in a Phase II multicenter trial to investigate the efficacy of FETO in regenerating fetal lung growth in the U.S. under FDA regulations.

Fetal interventions, including FETO, treat defects and conditions earlier in the development process and improve fetus health prior to birth. 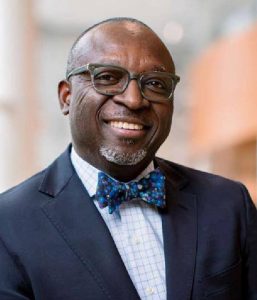 Abimola Famuyide, M.B.B.S., chair of the Department of Obstetrics and Gynecology, had the vision that brought Dr. Ruano to Mayo Clinic — establish Mayo Clinic as center of excellence for treating complex maternal and fetal medical conditions.

Department of Obstetrics & Gynecology Chair Abimbola Famuyide, M.B.B.S., says establishing Mayo Clinic as a national player in fetal surgery was one of his top priorities. “My vision for the maternal-fetal medicine practice included growing beyond a regional patient base. Patients will travel for a world-class fetal intervention program. Dr. Ruano has already surpassed my expectations in sheer volume of cases. In only a year at Mayo Clinic, he’s published more than 30 papers and given us a prominent place in NAFTNET (North American Fetal Therapy Network, an association of U.S. and Canadian medical centers with established expertise in fetal surgery and other multidisciplinary care for complex fetal disorders).

“We are delighted to have Dr. Ruano as division chair and head of our fetal surgery practice. He trained with the best in the world and is instinctively a Mayo physician in terms of valuing excellence, innovation, compassion and teamwork.”

Fulfilling the vision of a maternal-fetal medicine destination medical center

“I was attracted to Mayo Clinic’s mission of patient care, innovation and quality, and saw an opportunity to establish a strong multidisciplinary fetal surgery program with regenerative medicine capabilities to treat conditions and defects before birth,” he says. “We’re progressing and growing faster than I expected. The fetal intervention patients we’ve had to date came to Mayo specifically for these services — the best in prenatal diagnosis, fetal therapy and maternal fetal care.”

Within a year or two, Drs. Ruano and Famuyide hope to have new physical space for a maternal fetal medicine center of excellence. Dr. Ruano is particularly fond of the model at a hospital where he trained as a resident and clinical fellow — Hôpital Necker-Enfants Malades in Paris, France. That hospital offers a maternal fetal medicine center within the largest children’s hospital in France.

“I had the opportunity to train with a pioneer in fetal surgery at Necker within a group that was responsible for the best studies in the field at the time,” says Dr. Ruano. “Their hospital model ensures that fetuses we operate on can smoothly transition to the pediatric unit for care after birth.”

Dr. Flick describes the model as caring for the  child even before birth. “The future of our Children’s Center is incorporating maternal-fetal medicine to offer care for children in utero,  through  childhood and into adulthood for those with congenital diseases. Dr. Ruano has done an extraordinary job putting together a comprehensive, integrated team that is quintessential Mayo Clinic — obstetrics, anesthesia, pediatric surgery, neonatology, geneticists, radiology, nursing and others — to come to the patient and carefully consider the best course of action.”

Jumping at the chance to practice at Mayo Clinic

Coming to Rochester in 2016 wasn’t Dr. Ruano’s first exposure to Mayo Clinic. He was a visiting resident at Mayo Clinic in Florida in 2000. “I learned a lot about surgery, fetal ultrasound and maternal fetal medicine, and came away with the impression that Mayo Clinic was an amazing institution,” he says. “I recognized that the Mayo Clinic principles were the same as what were in my heart, so when I had the opportunity to return more than a decade later, I jumped at it.”

Dr. Ruano is already improving upon the innovations he brought to Mayo Clinic.

Dr. Ruano learned the technique during his postdoctoral training fellowship in obstetrics and gynecology at Hospital Vall D’Hebron in Barcelona, Spain. His group at Texas Children’s Hospital refined the technique.

“Our goal at Mayo Clinic is to be less invasive, use smaller instruments, see better and do more complex procedures that achieve the same outcomes for the babies but with fewer maternal risks,” he says. “For example, the repair of spina bifida with scopes will allow patients to have vaginal deliveries.”

Dr. Famuyide notes that Mayo Clinic recently added a pediatric neurosurgeon with expertise  in fetal procedures, Edward Ahn, M.D. “Our capabilities will expand by a couple of magnitudes when we can offer fetal brain interventions,” he says. “This probably wouldn’t have happened without Dr. Ruano’s presence at Mayo Clinic and the support of Robert Spinner, M.D. (chair of the Department of Neurologic Surgery at Mayo Clinic in Rochester and the Burton M. Onofrio, M.D., Professor of Neurosurgery). “It’s exciting to see how quickly this program has developed. We hope to add a fetal intervention surgical fellowship to train the next generation of subspecialists and further cement this program at Mayo Clinic.”

Editor's Note: This article was originally published in Mayo Clinic Alumni magazine, Issue 1, 2018. While on the face of it, this story doesn't seem about research, it's clear to me that research has led to the successful implementation of this program and its many intricate components. And as one of Dr. Ruano's first acts upon arriving at Mayo was to obtain a research grant to commence a clinical trial, it also seems clear that research will be an integral part of Mayo's Maternal & Fetal Medicine for the foreseeable future.

Here's a link to some of the open fetal medicine clinical trials at Mayo Clinic.

Read about Mayo's Maternal Fetal Medicine Fellowship, which provides a 3-year mentored training opportunity for physicians who want to specialize in high-risk obstetrics.