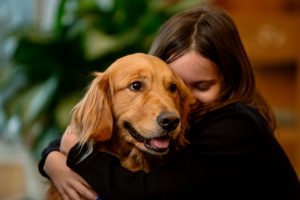 If you’re in California and see a dog outfitted in a snazzy vest with an electronic tablet, Spot, Fido or Lassie just might be participating in a Mayo Clinic epilepsy trial.

This research is part of the National Institutes of Health’s Brain Research through Advancing Innovative Neurotechnologies (BRAIN) Initiative, which aims to revolutionize understanding of the human brain. Mayo Clinic has partnered with Medtronic, the University of Minnesota, the University of Pennsylvania and the University of California, Davis, to create this epilepsy-management platform. The research is focused on drug-resistant epilepsy and has been studied in dogs with naturally occurring epilepsy in a laboratory kennel setting for several years. The four-legged Californians are the first to test the epilepsy management system in real-world conditions.

The pets newly enrolled in the study through the University of California, Davis, have electrodes implanted in their brains to provide 16 channels of intracranial electroencephalography (iEEG) and a rechargeable telemetry device implanted in their furry chests. A “handheld” device, stored in the dog’s vest, couples with cloud-computing resources and machine-learning algorithms to provide a seamless interface between the patient and physicians to automatically track disease activity and administer informed therapy. 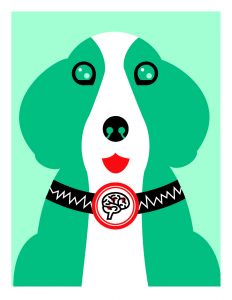 Canine comparison
The prevalence, age of onset and clinical presentation of canine epilepsy is similar to human disease, and dogs’ brain and body sizes are large enough to accommodate human-scale implants. Canine epilepsy is treated with many of the same medications and dosages as human epilepsy, and the refractory rate to medications is comparable in both groups. Approximately one-third of canines and people with epilepsy are resistant to drug therapy. The results of the trial could help the 1 million people who have uncontrolled epilepsy.

“Seeing your pet have a grand mal seizure is traumatizing,” says Gregory Worrell, M.D., Ph.D., an epileptologist in the Department of Neurology at Mayo Clinic in Rochester and principal investigator of the trial. “The dogs in this trial — and their owners — stand to benefit greatly from this epilepsy-management system. It goes without saying that people who participate in an upcoming parallel human trial could achieve life-changing results from this potentially transformative technology.”

The four-legged Californians are the first to test the epilepsy-management system in real-world conditions.

Collar all the parts
Previous trials at Mayo Clinic and elsewhere have demonstrated the efficacy of automated seizure detection, electronic seizure diaries, seizure forecasting and electronic brain stimulation to reduce seizures. Yet all of those pieces haven’t been demonstrated together in a cohesive system, which is the goal of the Mayo Clinic trial. The pet study will last three years, and human trials with the same system are expected to commence later this summer.

Dogs enrolled in the study will have three seizures without electronic brain stimulation being administered. Those first few seizures will be recorded and the data analyzed to determine predictive biomarkers for each trial participant. Ideally, subsequent seizures will be reliably predicted, treated with neurostimulation and prevented. Participating dogs will retain the system upon completion of the trial.

Put a leash on seizures 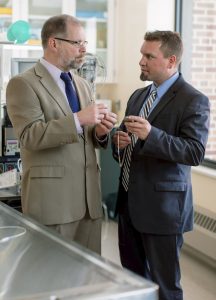 This project requires a multidisciplinary team of Mayo Clinic engineers, scientists, physicians and surgeons working closely with industry and the FDA.

“This is a new paradigm in which we’re using artificial intelligence to develop forecasts,” says Benjamin Brinkmann, Ph.D., lead engineer, Mayo Clinic’s Advanced Analytics Services. “We collect brainwave activity with the implanted device and run machine learning algorithms on the handheld device and cloud. Between these two architectures, we can forecast seizures and talk back to the device to administer patients’ therapy — stimulating multiple brain regions in real time to prevent seizures.”

Jamie Van Gompel, M.D., Department of Neurologic Surgery, says the implantable portions of the epilepsy management system are placed in a surgery that lasts only a few hours. “There are no repeat procedures or seizure induction required. The results of the dog trial will help us strengthen the engineering of the system before the human trial commences. We’re already working on the next generation of these devices.”

Dr. Worrell points out that the Medtronic-designed device is being tested in human trials with other diseases in the BRAIN Initiative, including Parkinson’s disease, cognitive disorders, depression, obsessive-compulsive disorder and dyskinesias.

“The potential for neuromodulation and neuro-restoration is exciting,” says Dr. Worrell. “This trial focuses on a therapy for a specific disease, but there’s evidence that brain stimulation can improve, restore and even enhance function. For now, we’re pleased to be on the cusp of transforming epilepsy care by using intelligent devices and technology that reliably forecast and deter seizure onset to improve the lives of patients.”