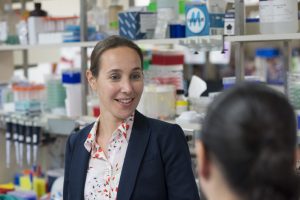 At the center of Dr. Rademakers’ research is the identification and functional analysis of novel genes and genetic risk factors for neurodegenerative diseases including frontotemporal lobar degeneration (FTLD), amyotrophic lateral sclerosis (ALS) and early-onset Alzheimer’s. Dr. Ertekin-Taner’s lab aims to discover and characterize genetic factors underlying the complex genetics of Alzheimer’s and other neurodegenerative diseases, and to use genomics to identify novel therapeutics and biomarkers. 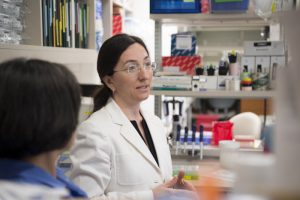 “Alzheimer’s is the epidemic of the 21st century,” says Dr. Ertekin-Taner. “The human brain is an unknown in many ways. Understanding the brain in health and disease is one of the biggest challenges in health care.”

Early success
The two investigators are up to the challenge. Between them they’ve generated $43.8 million in grants and other accomplishments: 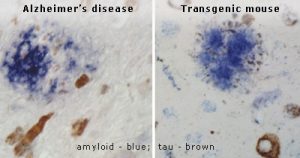 The two researchers’ paths crossed for the first time in 2007. Dr. Ertekin-Taner’s Ph.D. co-adviser, Michael Hutton, Ph.D., was Dr. Rademakers’ supervisor. The two women were given adjacent lab
and office space to share.

“We started as principal investigators at the same time — hiring and applying for grants and figuring out how to run our independent labs,” says Dr. Ertekin-Taner, who at the time had four clinical years at Mayo Clinic under her belt. She received a medical degree in her native Turkey and came to the U.S. to pursue studies in neuroscience. She received her Ph.D. at Mayo Clinic, followed by a research fellowship in neuroscience and clinical residency in neurology in Rochester. She worked in the lab of Steve Younkin, M.D., Ph.D., a world-renowned researcher with a focus on Alzheimer’s disease and the George M. Eisenberg Professor at Mayo Clinic. Dr. Ertekin-Taner moved from Rochester to Jacksonville in 2007 to pursue a clinical fellowship in behavioral neurology and continue her research as an independent investigator.

At the same time, Dr. Rademakers inherited Dr. Hutton’s lab when he left for a job in industry. It had been only three years since she’d received her Ph.D.— an unusually fast pace to be put in charge of a lab.

Dr. Rademakers came to Mayo Clinic in 2005 as a postdoctoral research fellow from the Fund for Scientific Research – Flanders, Belgium, although she is originally from the Netherlands. “The focus of my work in Belgium was FTLD, and Dr. Hutton had found the first gene responsible for it at Mayo Clinic in Florida,” she says. “I wanted to work for him for one year and learn as much as I could.”

Dr. Rademakers brought with her DNA samples from dementia families who were studied in the Belgian laboratory and combined them with Mayo Clinic’s samples. In 2006, the Hutton lab, in collaboration with Dr. Rademakers’ Belgian group, found the second gene responsible for FTLD: progranulin.

“I was in the right place at the right time to take over Dr. Hutton’s lab,” says Dr. Rademakers, who then received several NIH grant awards including an R01 focused on progranulin mutations, followed by two more independent NIH R01 grants and, most recently, an NIH/NINDS R35 award. She also is part of the NIA-funded Mayo Clinic Alzheimer’s Disease Research Center. In 2011 Dr. Rademakers led the study that identified the third FTLD gene — and long sought-after cause of the disease — receiving national and international attention, including the Potamkin Prize for Research in Pick’s, Alzheimer’s, and Related Diseases from the American Academy of Neurology. “All of the major genes for FTLD have been identified at Mayo Clinic in this lab.”

We need to seek each other out and support each other to make sure that our numbers increase and that we continue to wow the research community with our accomplishments.
– Nilufer Ertekin-Taner, M.D., Ph.D. 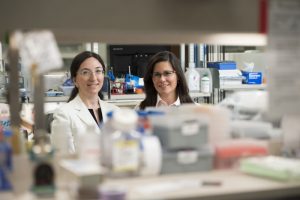 Parallel trajectories
Drs. Ertekin-Taner and Rademakers have had parallel research paths since meeting.

“In the early days we provided each other with a lot of emotional support as we applied for grants,” says Dr. Ertekin-Taner. “We rejoiced together when we succeeded, and we supported and affirmed each other when we didn’t get funding. It was nice to have a sounding board who was going through the same stages of research.”

The two also shared similar personal journeys. “I got pregnant with my second daughter as I was writing my first major grant,” says Dr. ErtekinTaner. “I was constantly nauseated. We’ve shared the challenges and beauty of creating grants and projects while growing our respective families. When you’re eight or nine months pregnant, physically uncomfortable and working 10 to 12 hours a day, you don’t share that challenge with just anyone. You don’t want to look weak or lose opportunities because people think you might not be up to them. I wrote the rebuttal of my first R01 late at night when I had a newborn. Some nights I nursed the baby and wrote parts of the grant with my left hand. I could share that with a fellow scientist who could see herself going through it someday. As working mothers, Rosa and I share anecdotes and camaraderie. It’s a nice release to share those feelings in a safe space with someone who won’t judge you. It’s a level of comfort I cherish.”

“We’re able to empathize with the balancing act of responsibilities we each have as lab P.I.s, which includes having a sound direction to our labs, going after questions we’re passionate about while getting funding, and providing a collegial and intellectually challenging environment for our lab staffs,” says Dr. Ertekin-Taner. “The other aspect of our balancing act is as mothers of younger children and partners of working husbands.”

Both women remark on how competitive their fields are. “Genetics research is a race,” says Dr. Rademakers. “We’re all trying to find new genes, and only one in the world can be first. Running a lab is very demanding, and the times you work aren’t well defined, so it can take over your life. We all want to be at the top of our field. If you take time off, others are still moving ahead, and you’re getting behind.”

Great research on Alzheimer’s disease and FTLD is occurring on our campus. It just so happens that two women are prominent in it.
– Rosa Rademakers, Ph.D.

Dr. Rademakers says she hasn’t dropped in productivity or funding since having children. “From the outside, others in my field wouldn’t know I’d had two children. But they may see less of me at meetings. I travel less than I used to.

“Having worked in research for more than 10 years and being among the few women in a leading
neuroscience department, we can compete with the best professionally — and be mothers and accomplish other things. Great research on Alzheimer’s disease and FTLD is occurring on our campus. It just so happens that two women are prominent in it.”

Dr. Ertekin-Taner cites the importance of support from successful women in similar career circumstances as key to her and Dr. Rademakers’ accomplishments. “How much easier might it have been if we’d had that kind of support even earlier in our careers?” she says. 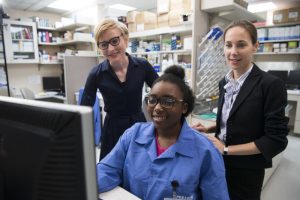 Shared success
Drs. Ertekin-Taner and Rademakers are passing the baton by nurturing young investigators in their labs.

“When I had my first child, I went from having complete flexibility of when and how much I could work to working around her schedule,” says Dr. Carrasquillo. “Having children has grounded me and helped me strike a better work-life balance.

“That said, women who pursue research careers and want to become principal investigators need better support systems. The majority of people in graduate school for biomedical research careers are women, but most P.I.s are men. We need a culture change that allows women to both advance and have children. Women can be successful scientists and mothers, but we’re still figuring out how to do it. I’d like to be involved in developing an infrastructure to help women advance in research careers without compromising their families as much.”

Dr. Ertekin-Taner says because she and Dr. Rademakers have lived through the challenges of having young children and active research careers, they can empathize and encourage. “Rosa and I are extremely passionate about our labs’ missions, and our employees are equally passionate. Work doesn’t occur in a vacuum--life happens. Empathy and support help make sure ‘the show goes on’ despite unplanned occurrences like sick kids or elderly parents with needs. In the supportive, safe, flexible environments we’ve created in our labs, if one person can’t make a presentation due to a life event, another person will take it over. Truly embracing diversity involves enabling people to follow their passions, including working differently — not less — to accommodate life’s conflicting needs.”

Dr. Ertekin-Taner also mentors Dr. van Blitterswijk and provides data for her research. “There are too few clinician-investigators in general and even fewer who are women,” says Dr. Ertekin-Taner. “Marka has asked me for guidance because I’m the only clinician-investigator in neurology with a bench lab at Mayo Clinic in Florida. We need to seek each other out and support each other to make sure that our numbers increase and that we continue to wow the research community with our accomplishments. The more examples we have of colleagues going through different stages of life, the better.”