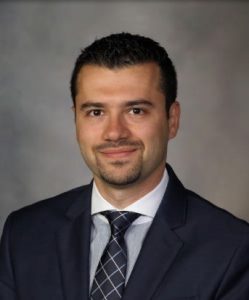 Fouad Chebib, M.D., grew up in a small town in Lebanon. After finishing medical school in Beirut, Dr. Chebib chased his dream across the world to Mayo Clinic.

That dream was finding a cure for polycystic kidney disease, or PKD, a genetic defect or mutation that results in the formation of kidney cysts. And it was inspired by his father, who received a kidney transplant ─ something quite rare in Lebanon at that time.

Dr. Chebib, now a Mayo Clinic nephrologist, has always known he wanted to be a doctor. "I always wanted to help people, but didn't know what kind of doctor I wanted to be," he says.

When Dr. Chebib's father was diagnosed with polycystic kidney disease and his treatment plan included dialysis, Dr. Chebib knew he wanted to find a way to prevent the need for dialysis or transplant in patients with the disease.

"He was on dialysis for several years," Dr. Chebib says. "That impression of me seeing him sick inspired me to make sure that no one else would go through that." 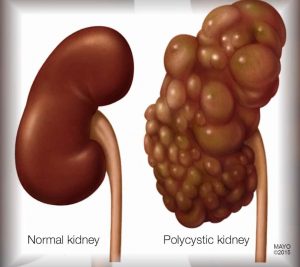 About half of individuals with autosomal dominant polycystic kidney disease eventually will require dialysis or kidney transplant by age 60. Advancements made over the years and the latest research led by Mayo Clinic have uncovered a way to delay the need for dialysis and transplant for these patients.

Dr. Torres and his colleagues discovered that tolvaptan can intervene in a way that slows kidney function decline. "This is the first treatment that targets a mechanism that directly contributes to the development and growth of the kidney cysts," says Dr. Torres. "This in effect means it may delay the need for a kidney."

Moving from bench to bedside

The Food and Drug Administration recently approved the use of tolvaptan for autosomal dominate polycystic kidney disease. That's when Dr. Chebib took the lead in making it a standard offering in Mayo Clinic's clinical practice. Dr. Chebib made sure tolvaptan is available at Mayo Clinic and his colleagues have the information and resources they need to include it in treatment plans.

"The great thing about the integration between research and practice at Mayo Clinic is that when discoveries like this happen, we're able to get them into practice as quickly as possible," he says.

Putting the research to practice is especially important to Dr. Chebib, now the father of a baby boy, as polycystic kidney disease is one of the most commonly inherited kidney diseases.

"This new treatment is important not only for patients with PKD but also for the kids and grandkids because it could be passed along to them," he says. "Hopefully with new treatments that can slow down or stop the disease, we can offer these patients a better lifestyle without the need for dialysis."

"Someone called me when the FDA approved the medication," Dr. Chebib says. "I was giving a talk at the time, and, then, right after that, I called my father."

Dr. Chebib recently was able to reunite with his father. Mayo Clinic News Network was there and shares more about Dr. Chebib's passion in this video:

This story originally appeared on the Mayo Clinic News Network.