Mayo Clinic researchers report that spinal cord inflammation associated with an antibody to myelin oligodendrocyte glycoprotein can mimic acute flaccid myelitis, a rare but serious disease linked to certain viruses that particularly affects children and can result in paralysis. The researchers show that detecting the MOG antibody has important treatment and prognostic implications. The findings appear today in JAMA Neurology.

Of 54 patients in the study, 19 percent with spinal cord inflammation from the MOG antibody were initially misdiagnosed with acute flaccid myelitis.

Patients with MOG antibodies may respond to steroids and additional treatments, such as plasma exchange to remove these antibodies from the blood, but acute flaccid myelitis does not respond well to such treatments.

Image A1:  "A view of the neck in sagittal plane (as if a line was drawn down the a person's middle top to bottom between eyes).

"The cervical spinal cord is the grey structure the arrows are pointing to and it should be dark grey like it is at the top of the image. It should be dark grey throughout and this shows a bright line (arrowhead) surrounded by more hazy white signal (arrows) that we often see with MOG antibody cases." - Dr. Flanagan 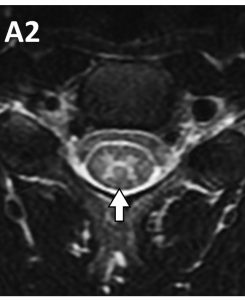 “It is important for physicians to search for this MOG antibody in individuals who present with paralysis from spinal cord inflammation because the patients with MOG antibody respond well to treatment that lowers the immune system response,” says Eoin Flanagan, M.B., B.Ch., a Mayo Clinic neurologist and senior author of the article.

The nerves of the spinal cord are covered with an insulating layer called the myelin sheath, similar to insulation of an electrical wire. MOG is a part of this insulation system. “Patients who have the MOG antibody get inflammation that damages this insulation, with loss of signaling in the spinal cord resulting in paralysis,” says Divyanshu Dubey, M.B.B.S., a Mayo Clinic neurologist and first author of the article.

Testing for the MOG antibody also helps from a prognostic standpoint, Dr. Dubey says, because its presence helps predict patients who are more likely to relapse. In 2017, Mayo Clinic developed the MOG antibody test, the first of its kind in the United States.

Image A2: "The oval grey circle is the spinal cord in transverse plane (vertical plane dividing body top from bottom through waist) depicted by the arrow.

"This should be dark grey throughout and you can see some white area that forms a “H-sign” appearance which is what we frequently see with the MOG antibody." - Dr. Flanagan

Study limitations include the variability in treatments used, which prevented the researchers from determining which immune lowering treatment was best.

The authors note conflict of interest disclosures in the paper.