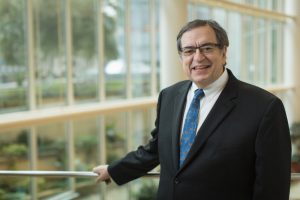 Each year, nearly 300,000 patients receive the lifesaving chemotherapy 5-fluorouracil (5-FU) to treat many types of cancer, including colorectal, breast, bowel, skin, pancreatic, and esophageal cancer. While it can be an effective treatment, it doesn’t work for everyone. In fact, up to 30 percent of those who receive the standard dose can have serious, life-threatening side effects.

Robert Diasio, M.D., director, Mayo Clinic Cancer Center, has uncovered genetic variations that cause some patients to experience these serious side effects. Now using pharmacogenomics testing, which looks at how a person’s genetic traits affect their medication response, and a new gene verifier model, Dr. Diasio and his colleagues are able to test and find a safe, alternative 5-FU dose, allowing these patients to get the benefit of treatment, without harmful side effects.

“While a standard dose of 5-FU can be very effective in treating many cancers, it is challenging to predict who will have serious side effects from the therapy. That’s because genetic testing prior to therapy is not mandatory. Therefore, we’re only able to identify these patients after they’ve had therapy and experienced severe complications,” says Dr. Diasio.

A tool to identify a safe, alternative dose

Through his laboratory research, Dr. Diasio has uncovered genetic variations in the DPYD gene that help drive how a patient processes the 5-FU therapy.

His gene verifier tool has already helped redirect care and individualize therapy for a patient with rectal cancer.

Only 5 days after starting 5-FU therapy to shrink his tumor before surgery, the patient experienced extreme fatigue, severe diarrhea and a skin rash. He was hospitalized and had to stop treatment.

Pharmacogenomics testing revealed that he had one common DPYD variant known to cause complications, along with a rare genetic mutation that may also be interfering with how he processed the medication.

Using the new model, Dr. Diasio and his colleagues were able to understand how both the common and rare variant caused the patient to process 5-FU more slowly, causing debilitating side effects.

“For this patient, the standard 5-FU dose caused an overdose of medication that was not only fighting his cancer cells, but also damaging the normal cells in his bone marrow and nervous system. Based on our model, we calculated that his dose should be reduced by 75 percent – this is a dose that physicians would never have considered without pharmacogenomics and genetic analysis,” says Dr. Diasio.

The adjusted dose allowed the patient to receive the therapy he needed after surgery to prevent the cancer from returning, with fewer side effects. Dr. Diasio and his colleagues recently published these results here.

This is just one example of how pharmacogenomics helps individualize cancer therapy for patients. It can also help physicians select from among many different therapies to target the unique genetic characteristics of a patient’s cancer.

“Our pharmacogenomics research has shown that many factors contribute to medication response and one of those is genetics. We’ve also identified how differences among ethnic groups affect response to medications like 5-FU. For example, 3 to 5 percent of Caucasians carry one DPYD gene variant that causes serious side effects, while those from African descent carry a different variant with the same risk for complications,” says Dr. Diasio.

“As new genetic variants linked to cancer and medication responses are discovered, we’ll continue to refine our individualized treatments directed at each patient’s disease.”

This article originally appeared on the Center for Individualized Medicine blog Nov. 5, 2018.