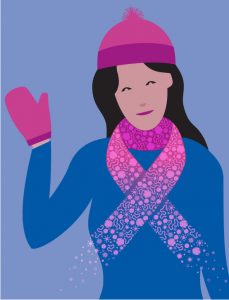 Can breast cancer be prevented with a vaccine? Keith Knutson, Ph.D., Department of Immunology and director of the Discovery and Translation Labs Cancer Program at Mayo Clinic in Florida, thinks so. And he thinks it will happen during his lifetime.

In collaboration with the National Breast Treatment Coalition, Dr. Knutson has developed a vaccine that could prevent all three subtypes of the disease — estrogen receptor (ER)-positive, HER2-positive and triple-negative. The vaccine targets six proteins (HER2-neu, mammaglobin-A, MAGEA3, survivin, hTERT and MUC1) that have been found through multiple studies to overexpress in breast cancers.

The new vaccine is a fundamental shift from how vaccines traditionally prevent infectious disease. Rather than use a virus, bacteria or their components, Dr. Knutson’s vaccine immunizes against proteins that are encoded in a patient’s DNA.

“When we target an infectious disease with a vaccine, we generate immunity against the microorganism that causes the disease by attacking the foreign agent,” says Dr. Knutson. “Breast cancer isn’t caused by a microorganism. Rather, it is driven by the body’s natural proteins. Therefore, we are targeting the proteins, which hasn’t been done before in a vaccine for primary prevention. Cancer vaccines sensitize the immune system to the appearance of cancer tissue. We know from preclinical studies that targeting these molecules in animal models is safe. This is a new trajectory for how we prevent disease.”

Dr. Knutson is embarking on a yearlong phase I clinical trial with women who have been treated for
advanced metastatic breast cancer that is likely to recur. This effort is supported by the National Breast
Cancer Coalition.

“We want to involve patients who are likely to benefit from the vaccine while we make sure it performs as we think it will — generating a safe immune response,” he says. “Patients who have had advanced metastatic breast cancer have nothing to lose.”

A phase II trial, likely to begin in 2020, will focus on patients who are at high risk for breast cancer. Dr. Knutson estimates it will take five to 10 years to determine if the vaccine reduced incidence of breast cancer in the high-risk population. A phase III trial would involve 100,000 women across multiple centers.

“Look around you for a women who is about 25 today,” says Dr. Knutson. “By the time she completes her child-bearing years — around age 40 — we could conceivably have this vaccine ready to prevent her from developing breast cancer. This isn’t pie in the sky. We believe this is doable. We’re working as fast as we can. All of us on the team know women who are or have been affected by breast cancer. The only thing that could speed along our efforts is additional funding for more lab techs, regulatory staff, clinical trial experts and others.” 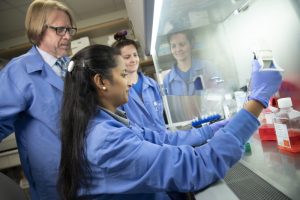 Is it possible to prevent recurrence of breast cancer by stimulating the immune system?

Dr. Knutson thinks so. He has three vaccines in clinical trials to reduce mortality from breast cancer in the absence of a primary preventive vaccine.

“We know the immune system protects against cancer. People who have higher levels of immunity to cancer have better outcomes,” he says. “We’re working on ways to safely boost these protective responses because current drug treatments for cancer are highly toxic. Vaccines, however, are not toxic.

“If we can stimulate enough immunity to these cancers, our hope is that the immune system will take over and prevent cancer from developing or recurring.”

Dr. Knutson and his team have identified an antigen on the surface of triple-negative cancer cells: folate receptor alpha. The team has developed a vaccine that generates an immune response against that protein. The drug in the vaccine has been in clinical trials for patients with triple-negative breast
and ovarian cancer since 2012.

“After these patients have completed surgery and chemotherapy, we target the regions of the folate receptor alpha protein that are abnormally expressed in triple-negative cancer,” says Dr. Knutson. “We do this by immunizing patients six times over six months. Ideally, patients will develop an immune response. Then, every six to 12 months, we will give them booster shots.

“If we can maintain levels of immunity against folate receptor alpha, we could eliminate cancer recurrence or significantly reduce it in patients who are high risk for recurrence.”

Vaccination teaches the body’s immune system T cells to recognize cancers as the enemy. Dr. Knutson says, “If tumors start to grow back, there are enough of them to outrace or beat the growth of tumor cells.”

Dr. Knutson has begun a phase II clinical trial of 280 patients across Mayo Clinic locations and seven other centers. He and his team will follow patients for two to three years, examining how quickly patients develop an immune response, what the response looks like and whether the vaccine has an effect on disease recurrence.

Whether I’m at Mayo Clinic, at home or on vacation, my vaccine work is always on my mind. Rather than get me down, these personal stories motivate me to work even harder.”
– Keith Knutson, Ph.D.

“From our phase I trial, we know the vaccine works in humans to generate an immune response,” says Dr. Knutson. “In fact, the vaccine induced immunity in 90 percent of patients involved, and the response persisted for at least 12 months. We don’t yet know if the vaccine prevents disease recurrence. This is an exciting prospect to meet a significant unmet need.”

Dr. Knutson’s work in this area is supported by a $13.3 million, five-year Breakthrough Award from the Department of Defense.

Ductal carcinoma in situ
Only about 35 percent of ductal carcinoma in situ (DCIS) lesions morph into cancer, but physicians can’t identify which lesions are potentially dangerous. So the 60,000 cases of noninvasive DCIS in the U.S. each year are treated with typical breast cancer therapies including surgery, radiation and hormone therapy.

Dr. Knutson has developed a vaccine that aims to treat DCIS patients before other therapies commence to generate a fast immune response and shrink tumors. Patients would be immunized four times per week for two weeks. If successful, the vaccine could eliminate the need for surgery, radiation therapy and long-term use of hormone therapies. Dr. Knutson’s phase I vaccine trial recently began enrolling patients. He hopes this vaccine will become part of a routine immunization schedule to prevent DCIS altogether.

Dr. Knutson’s work in this area is supported by a $3.7 million grant from the Department of Defense.

HER2-neu breast cancer
Dr. Knutson recently received funding for a phase II clinical trial for a vaccine to treat HER2-neu breast cancer, which accounts for 15 to 20 percent of breast cancers. Patients will be immunized after completing treatment with surgery and chemotherapy. The vaccine will boost patients’ immune systems, and researchers will follow them to monitor for immune response and cancer recurrence. Dr. Knutson anticipates the trial will begin enrolling its 190 patients next fall. Dr. Knutson’s work in this area is supported by an $11 million, four-year Breakthrough Award from the Department of Defense.

Dr. Knutson says it’s likely a secondary ovarian cancer vaccine will come to fruition in his lifetime. “While rare, ovarian cancer is deadly. It recurs so rapidly that we can test vaccine strategies relatively quickly.”

Always on my mind
The gravity and urgency of his vaccine work weighs heavily on Dr. Knutson. “One of the physician assistants who worked on my first clinical trial died from ovarian cancer. My aunt survived breast cancer. We all know women who develop and die from these cancers, so there’s no time to waste,” says Dr. Knutson. “Whether I’m at Mayo Clinic, at home or on vacation, my vaccine work is always on my mind. Rather than get me down, these personal stories motivate me to work even harder. But I’ll be happy when we don’t have to hear them anymore.”

Would love to hear updates about this vaccination

I just finished chemo and surgery for Triple Negative Breast cancer. I am doing radiation now. How can I take part in the vaccine trial?

Thank you for reading Advancing the Science. We are unable to provide specific patient advice or appointments through this venue. However, more information on this trial is available here: https://www.mayo.edu/research/clinical-trials/cls-20366156, as well as contact information for this and other cancer-related clinical trials. Best wishes to you in the new year, and especially as you continue your cancer journey.

How can I get in a study? Completed tchp and surgery. I have lobular ER and HER2+ Classic. It’s rather an odd combination for lobular classic. Thank you

Best wishes to you in the new year, and especially as you continue your cancer journey.

This article sounds very promising. Is there any updated information for breast cancer vaccines becoming available?
I noticed this article is dated 2019.

Thank you for reading Advancing the Science.

Research on cancer-prevention vaccines continues — they’re all still part of active trials. If you want to learn more about the specific vaccines being studied, visit this page: https://www.mayo.edu/research/centers-programs/discovery-translation-labs-cancer-research/focus-areas/cancer-vaccines.